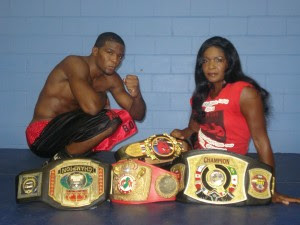 Denis Douglin is a rising junior middleweight prospect, who is quickly becoming noticed for his steadily improving boxing skills and an unusual nickname, “Da Momma’s Boy”. Denis uses the nickname because his mother, Saphya, has been his trainer since he was eight years old. She is a certified boxing coach, and has been a personal trainer and nutritional specialist for over twenty years, as well as a full time accountant.
“My mom just loves working,” said Douglin.
Saphya pushed Denis into boxing after he returned home one day following a fight in school. She started training Denis at the Rivera Boxing Gym in Brooklyn, N.Y., but when it closed down, they started training at the famed Gleason’s Gym. Saphya always found herself giving advice to kids and helping people in the gym. At times, Saphya sparred with men and women to prepare them for competition. Yet, Denis’ love for the sport increased gradually over time.
Despite the fact that Denis was attending his first year of high school, his family moved from Brooklyn to Marlboro, New Jersey. Nevertheless, he still attended high school in Manhattan, while his mom worked as an accountant in Brooklyn. Still, they would meet at Gleason’s Gym for training. Long hours of preparation and commuting put stress on Denis, so Saphya decided to look for a gym closer to home.
The pair resumed training at the Middletown P.A.L., a gym located in Middletown, N.J. However, the energy of the gym was unlike the atmosphere of New York.
“Some people trained there for two hours a day,” stated Douglin. “We wanted to work out longer.”
In July 2007, Saphya founded the New Breed Boxing and Fitness Gym in Freehold, N.J. Once again, Saphya is teaching kids the fundamentals of boxing, but this time she has assistance from her nephew, Naquann, who is also a certified boxing coach and Imamu Mayfield, a former IBF cruiserweight champion.
Douglin said, “Imamu has helped me with promoters and everything. We have an amateur in the Junior Olympic Nationals. We have another kid participating in the Golden Gloves right now. It’s a fast growing gym.”
While Douglin’s future in the sport of boxing is continuing to look exceptionally bright, he had to deal with a major setback in 2006, which kept him from possibly competing at the Olympics.
“I got into a car accident with my 1996 Toyota Corolla on a rainy night. I lost control of the car and went around the curb, hitting a pole at a high speed. My head hit the windshield, and I was cut above and below my eye. I also broke a bone in my neck. The doctor told me if I would have broken the bone next to the one I broke, I would have been paralyzed. The doctor also said I would never be able to fight again, but the therapy helped me and I am fine now.
“I could have been hurt a lot worse. The accident made me realize that I was meant to do something in the sport of boxing. I became more focused and determined than ever.”
At the time, Douglin felt the year off pushed him back a great deal. It was supposed to be the first year that he would compete as a Senior Open boxer.
“I was not as effective until the following year,” said Douglin. “I had trouble making weight. I was stuck in between 152 pounds and 165 pounds.”
Douglin has already sparred with escalating middleweight contender Danny Jacobs, junior middleweight Deandre Latimore, Fernando Guerrero, Aaron Pryor Jr. and Shawn Porter. Sechew Powell, who recently avenged a loss to Deandre Latimore, gave Denis tips on fighting.
“I have known Sechew for a long time,” said Douglin. “When I was younger, he would show me tricks in the ring.”
After sparring with Deandre Latimore for his fight with Sechew Powell, Douglin modified his training methods.
“My training is more regimented now,” stated Douglin. “I was overworking myself. I take a few breaks in between now. I don’t box everyday.
“I used to run 5 miles everyday Monday through Friday. Now, I run 5 miles one day, sprint the next one and run 2-3 miles on the third day. Then, I rest for one day.
“I started sparring 3 days a week. In the first week, we do 6 rounds each day. Next, we go to 8 rounds for 2 days the following week. Then, we do 6 rounds everyday. Now, I am doing 10 rounds twice a week.”
On March 31st at B.B. Kings in Manhattan, Douglin (7-0, 3 KO’s) will square off against Chad Greenleaf (12-14-1, 5 KO’s) in a six-round, junior middleweight bout, which is part of Lou Dibella’s “Broadway Boxing” series. Douglin wants to stay extremely active.
Douglin acknowledged, “I want to fight every month or as much as possible, so I can become a household name. I would love to fight 8 times this year.”
The bout with Greenleaf will take place at Douglin’s most comfortable fighting weight.
“Fighting at 154 lbs. helps with my power,” said Douglin. “I have a better punch at that weight.”
Douglin has won decisively in each fight, but feels he can improve greatly.
“I give myself a B or B- in every fight,” declared Douglin. “I want to move my head and jab more. I have a real good jab when I use it.”
Douglin took this semester off because he was traveling a lot, although he will be attending classes again in the fall at Rutgers. He is thinking about majoring in Business Administration. Like his mother, however, Douglin sees himself helping people in the future.
Douglin confirmed, “If I am not boxing, I would love a career as a teacher.”
Like mother, like son.
Posted by Michael Gerard Seiler at 10:28 PM