Mares Stops Almanza In 5th Round, Looks Ahead To Bout With Perez 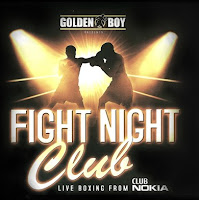 Abner Mares (20-0, 13 KO's) dazzled fans at Club Nokia in Los Angeles, California by scoring a spectacular 5th round technical knockout over Felipe Almanza (19-15-3, 9 KO's). Mares, 24, took this fight as a tune-up before he challenges Yonnhy Perez for the IBF Bantamweight Title on May 22nd, which will be the co-main event prior to Israel Vazquez vs. Rafael Marquez IV on Showtime.
Mares looked very sharp and exceptionally composed from the opening round, landing accurate, clear-cut punches and precisely placing them. In round one, Mares chased down Almanza and landed some stinging left hooks while Almanza was briefly on the ropes.
Mares continued to press the action in round two, unleashing punches that flowed particularly smooth. Mares never unloaded wasteful shots and caught Almanza with some combinations, even though Almanza was using a great deal of lateral movement.
Mares closed the gap in round three, and dropped Almanza after landing body shots and a well-timed left uppercut. From there, Mares stepped up his aggression and punch output. At one point, Mares connected with an overhand right to the head that briefly dazed Almanza.
Almanza's lateral movement slowed in round four, which enabled Mares to thoroughly overwhelm him with a high volume of body and head shots. Mares utilized a lot of feints to set up some crisp, well-defined body punches later in the round.
Finally, Mares got rewarded for his hard work in the fifth round. Mares hurt Almanza with a short, left uppercut during an exchange in the corner. Then, Mares caught Almanza with a right uppercut when Almanza's back was against the ropes. After absorbing more punishing shots from Mares, Almanza got hammered with another powerful right uppercut to the head that floored him. The referee stopped the bout at 2:23.
Mares looked more than ready to battle Yonnhy Perez (20-0, 14 KO's) on May 22nd. Perez is a strong puncher with an accurate, stiff left jab, who throws a large amount of punches himself. However, Perez tends to stand in front of opponents longer, which is especially dangerous when dealing with the high volume and precise punching of Mares. Mares' punches seem more fluid compared to Perez, and he uses much more lateral movement. Also, Mares won 2 of 3 fights from Perez in the amateurs. Look for Mares to quite possibly wear Perez down with his energy and explosive punch output, stopping him between the 8th and 10th rounds.
UNDERCARD BOUTS
In a junior featherweight match-up, 21-year-old Derrick Wilson (5-1-2. 2 KO's) and 19-year-old Adam Ochoa (2-1-1, 1 KO) fought to a 4 round majority draw. Official scores were 39-37 in favor of Wilson and 38-38 twice.
Clearly, Wilson displayed the quicker hands and staggered Ochoa with a left hook in the opening round. However, Ochoa stood his ground, while Wilson repeatedly tried to land one punch at a time.
In round two, Wilson did well throwing punches behind his jab, but when he stopped, Ochoa landed some solid body punches with Wilson's back on the ropes. As opposed to the previous round, Ochoa significantly increased his punch output.
The third round was another competitive round with Wilson initiating the action and Ochoa countering him. In the fourth and final round, both fighters engaged at incredibly fast pace. Wilson connected with crisp left hooks, whereas Ochoa landed a hard right in the middle of the round. Wilson threw the higher volume of punches in the round and the entire fight.
It seemed unfair that Wilson did not receive a decision victory. Ochoa fought courageously and landed some effective, clean punches, but he did not outwork Wilson or clearly control any rounds.
In featherweight action, Ronny Rios (10-0, 5 KO's) remained unbeaten after knocking out Andres Ledesma (15-17-1, 10 KO's) at 1:45 of the fifth round.

In the first round, Rios stalked Ledesma, landing straight rights and aggressively attacked his body. Lesdesma tried to jab and use lateral movement to negate Rios' assault.

Ledesma's lack of a consistent jab and power enabled Rios to get into close range, where he repeatedly pushed Ledesma back with straight rights and rock-solid body punching. In the middle of round two, Rios snapped Ledesma's head back with a stinging counter right.

Rios possessed the superior hand speed, placed his shots more efficiently, and continually got his punches off first.  Ledesma really started to show the effects of Rios' violent body attack in the third round.
Ten seconds into round five, Rios buckled Ledesma with an overhand right to the head. Then, Rios moved closer and landed a barrage of punches. Momentarily, Ledesma held his own battling on the ropes, but Rios connected with a crushing left hook to the body that sent Ledesma to his knees. Ledesma could not beat the ten count.

Rios, 20, is quickly rising through the rankings and should be fighting  8 round bouts soon. On the other hand, Ledesma, 30, has been an awful 1-12 in his last 13 fights after starting his professional career 13-1-1.
Posted by Michael Gerard Seiler at 3:09 PM