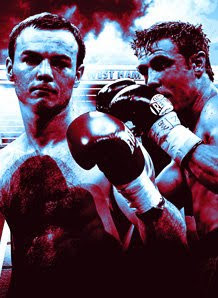 Katsidis, 29, applied heavy pressure from the opening bell, scoring with consecutive left hooks in round one. Still, Mitchell controlled the pace of the round, circling and unleashing a sharp left jab.

In round two, Mitchell, 25, struck Katsidis early with a left hook followed by consecutive right - left combinations. However, Katsidis closed the gap, landing a series of left hooks and overhand rights, as Mitchell's back was pressed against the ropes. Toward the end of the round, Mitchell caught Katsidis with a crisp, counter left hook to the head.

Katsidis hammered and dazed Mitchell with a powerful left hook to the head in round three. Then, Katsidis landed a barrage of punches, as Mitchell was on shaky legs. Next, Mitchell threw and landed a left uppercut - left hook combination. After that, Katsidis stunned Mitchell again, connecting with a massive left hook. Katsidis went on to throw multiple shots. As Mitchell momentarily turned away, Katsidis landed a crushing overhand right, which prompted referee Dave Parris to stop the bout.

"I feel I am the best I ever been," Katsidis declared. "I'm enjoying my time here. 20,000 people are screaming to support the sport I love, regardless of who they are cheering for."

Mitchell feels he will be able to overcome his first professional defeat.

"I made a mistake and I paid for it," stated Mitchell. "He landed a big shot, but I'll be back in the summer."
Posted by Michael Gerard Seiler at 5:54 PM