Khan Too Strong For Malignaggi 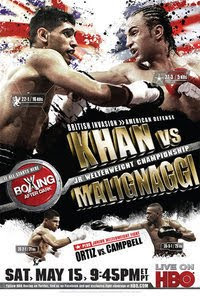 Amir Khan (23-1, 17 KO's) retained his WBA junior welterweight title, scoring an 11th round TKO against Paulie Malignaggi (27-4, 5 KO's) in front of a raucous crowd at the theatre inside Madison Square Garden.

Khan, 23, controlled the pace the entire fight working behind a devastating and accurate left jab. Khan consistently got his punches off before Malignaggi, which kept the Brooklyn native off-balanced. After becoming exceedingly frustrated, Malignaggi, 29, tried to sit back and counter Khan, although he had a rough time because he lacked the power needed to hurt him.

“He’s on an upswing right now, but it’s about to end,” Roach told the media on the conference call prior to the bout. “We have an advantage in every aspect of the game – speed, power and boxing ability. Everything he does well, we do it better."

Freddie Roach's words could not have been anymore true on Saturday night. Khan was able to impose his will, and struck Malignaggi repeatedly with hard, flush shots. Occasionally, Malignaggi connected with his swift jab, but he was quickly countered with crisp left hooks and solid overhand rights from Khan. The slick boxer sustained a battered and bruised face, while Khan only suffered minor swelling above his right eye.

Khan also exhibited a great deal of patience, placing his shots with extreme precision. He never got careless when he unleashed his punches, even though Malignaggi did not hold the power to harm him. On the other hand, Malignaggi stood in front of Khan too long, which is not his forte. Malignaggi could have displayed more lateral movement. Instead, he chose to stand and fight. While Malignaggi absorbed a beating tonight, he showed a tremendous amount of heart and courage. All of Malignaggi's fans and the boxing public should be pleased with his effort. MMA Gear

Malignaggi also feels Khan fights like he did when he was younger.

"He kept changing distance," added Malignaggi. "That was the plan for me, but Amir was quicker. When I turned pro, I had a similar style to Amir. As I got older, I hurt my hands. I started slowing down and picking my shots more. I ran into a clone of myself when I was younger. He was stronger, bigger and faster. I couldn't keep up with him; I couldn't get the distance right."


After the bout, Amir Khan told his future plans to HBO's Max Kellerman.

"I am not going to leave 140 lbs. until I unify the title. Till I'm number one, I am not leaving the division."
Posted by Michael Gerard Seiler at 10:54 AM

great article. I enjoyed it.

Great article. I enjoyed it Mike