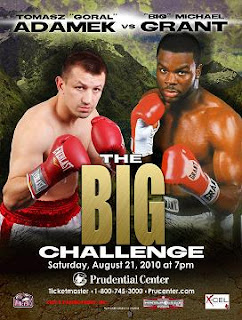 Can the distinguished Polish pugilist cope with the giant’s incredible height and reach advantage?

Adamek, who now resides in Jersey City, New Jersey by way of Zywiec, Poland, will make his 5th appearance at the Prudential Center. He has won ten straight bouts, and is looking to extend his successful winning streak in front of an always energetic crowd at the Prudential Center, where countless Polish fans gather to support their hero. Adamek will attempt to exploit the chin of Grant, who has been stopped in all three of his professional losses.

“I never enter a fight seeking to win by a knockout,” said Adamek. “He’s a tall guy, but I am very, very quick. Everyone has their own advantages. For me, it’s combinations and many, many punches.”

Will an Adamek victory pave the way for a clash with David Haye, Vitali Klitschko or Wladimir Klitschko on HBO in the near future?


Adamek added, “We have a plan for August 21st. After that, you’ll see what’s next.” 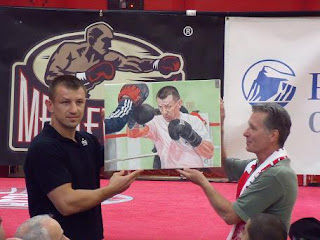 (Adamek with renowned artist John Murawski)
Michael Grant was not in attendance today, as he is training in Las Vegas, Nevada with Eddie Mustafa Muhammad for the confrontation ahead. Since losing by a seventh round stoppage against Dominick Guinn in 2003, Grant has not been defeated, earning 15 wins in his last 16 fights, including 8 straight victories. Most recently, Grant stopped Kevin Burnett in the first round on May 7, 2010. Prior to that, Grant had not fought since late in 2008. A victory over Adamek would springboard Grant into the mix among the elite heavyweights.

“This is a lifetime opportunity for him,” Adamek exclaimed. “100% of him will come out.”

Brooklyn’s Sadam Ali (8-0, 4 KO’s) will be featured in a six-round welterweight bout. Ali is coming off an impressive third round stoppage of Julius Edmonds on ESPN2 “Friday Night Fights”.

Paterson’s Jeremy Bryan (13-1, 6 KO’s) returns to action in a six-round junior welterweight match-up. In his last outing, Bryan was kayoed in the eighth round by Vincent Arroyo in Atlantic City, New Jersey on the undercard of Kelly Pavlik-Sergio Martinez.

“The Big Challenge”, presented by Main Events, Ziggy Promotions and X-Cel  Worldwide, is being distributed in North America by Integrated Sports Media for live viewing at 9PM EST / 6PM PST on both cable and satellite pay-per-view via iN Demand, DIRECTV, Avail-TVN and DISH Network in the United States and Viewer’s Choice and Bell TV in Canada for $29.95.