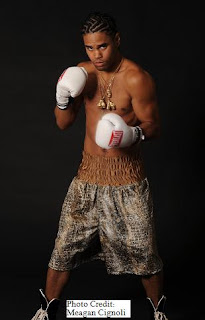 Borough Park is located in the southwestern part of Brooklyn, New York, and is home to one of the largest Jewish populations in the United States. It is here that Shemuel Pagan, a Puerto Rican-Amercian of strict Jewish faith, resides. Robert Pagan, Shemuel's father, passed down Judaism to his son after learning about the religion from Yoel Judah, who is the father of former undisputed welterweight champion, Zab "Super" Judah. Like Yoel, Robert is a former kickboxing champion, however, Shemuel got into boxing because of his mother, Margarita Pagan.

"My mother got me into boxing to defend myself," explained Shemuel. "In junior high school, I was 13-years-old and weighed 75 lbs."

Shemuel's dad had lost interest in boxing until his son pursued the sport with intense enthusiasm.

"I revived my dad's spirit ever since I won the Junior Olympics at 14-years-old," noted Shemuel. "Since then, I have been boxing."

One of Shemuel's many goals in life is to achieve the level of success in the ring that other fighters from Brooklyn have attained, including Mark Breland, "Iron" Mike Tyson, Riddick "Big Daddy" Bowe, Paulie "The Magic Man" Malignaggi, Sechew Powell and his role-model, Zab "Super" Judah. Other young, notable fighters from Brooklyn climbing the rankings at this time are Danny "The Golden Child" Jacobs, Sadam Ali and Denis "Momma's Boy" Douglin. If Shemuel's professional career parallels his outstanding amateur career, boxing will have another world champion representing Brooklyn.

As an amateur, Shemuel ranks at the top with Mark Breland, who won 5 New York Daily News Golden Gloves Championships and holds a 110-1 career amateur record. Shemuel owns 89 amateur wins, and is the only fighter to match Breland's 5 New York Daily News Golden Gloves Championships. Shemuel is also the only amateur fighter to win the 5 titles in 3 different weight classes; 2 times at 119 lbs., 2 times at 132 lbs. and 1 time at 141 lbs. In contrast, Breland accomplished the feat once at 139 lbs. and 4 times at 147 lbs.

Some of Shemuel's other amateur accolades include, but are not limited to:
On August 21st, Shemuel will make his professional debut as a lightweight at the Prudential Center in Newark, New Jersey. The bout will take place on the undercard of Tomasz Adamek versus Michael Grant. The fight card will be promoted by Main Events, who have helped establish the Prudential Center as one of boxing's hottest venues. 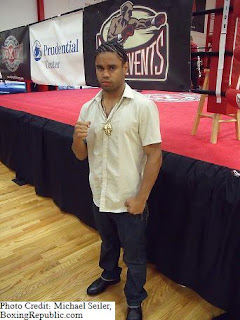 This 22-year-old southpaw has already set some admirable short-term and long-term goals.

"I want to start my career 10-0," exclaimed Shemuel. "Later, I would like to become an entrepreneur after I am financially stable. My goal in entrepreneurship is to own a studio. I love music and I want to invest in young talent, such as singers and rappers."

Shemuel's long-term goals do not stop there. He also desires a position as an inspirational community leader.

"I love kids," stated Shemuel. "They just need people to look up to so they can have fun. All they need is someone to show them attention, especially if they come from broken homes. Additionally, I envision owning a boxing gym someday. I would love to teach kids discipline, because the future is in the little ones. For our environment to be better, we need them to be better than we were in our time."

Shemuel added, "People who aren't wealthy have a difficult time making a living. I love to lend a hand to a homeless person when I see one. I will give my last dollar before I spend it."

Ira Kaufman, Shemuel's manager, has set some objectives for his fighter to fulfill. After that, he believes Shemuel will start seeing his dreams turn into reality.

"Our goal is to fight once a month," acknowledged Kaufman. "I want to help Shemuel turn a successful amateur career into a successful professional one."

Not many fighters get to spar with their idols, but Shemuel got the opportunity to spar with Zab Judah at 15-years-old.

"I look up to Zab's speed and power," admitted Shemuel. "Once, he dropped me with an uppercut to the body. He told me, 'Slow down a bit. There is a time and place for everything.' I was always close with him." 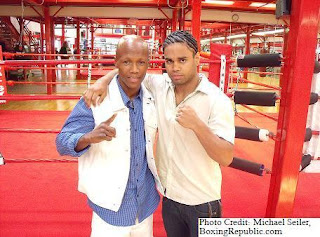 Shemuel exhibits a superb natural balance and adept knowledge of when to unleash his punches.

"My favorite punch is a left uppercut to the body," declared Shemuel. "I have been working a lot more on body punching in the gym."

The journey into the professional ranks begins August 21st.