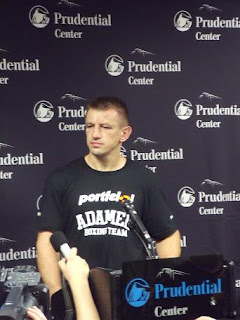 Tomasz Adamek, 33, captured a twelve-round unanimous decision over Michael Grant, 38, in a fierce battle that left 10,972 fans at the Prudential Center applauding on their feet at the final bell. Official scores were 117-111, 118-110 and 118-111, although many at ringside had the fight closer.

As soon as the bell rang for the first round, Michael Grant landed a clean, short right. From that moment, Adamek circled and looked for openings. Then, Adamek scored with a right to Grant’s body. Later, Adamek jarred Grant with a left hook to the head. After that, Adamek landed a right, but the momentum of his punch carried him into Grant. Simultaneously, Grant unleashed a right uppercut, and both men fell into the ropes and onto the canvas as the round came to a close.

Both fighters tried to dictate the pace in round two by utilizing their left jabs. Adamek missed with a lunging left hook, but nailed Grant with another one moments later. Then, Adamek connected with a left hook – overhand right combination.


In round three, Adamek attempted to get inside of Grant’s 86’’ reach. As a result, Grant threw a left hook that sent Adamek into the ropes. However, Adamek was not hurt, and began controlling the pace again by shooting his left jab. Next, Adamek landed consecutive left hooks behind the jab. Then, Grant countered quickly with a short right that backed Adamek up.

“I hurt him five or six times in the fight,” said Grant. 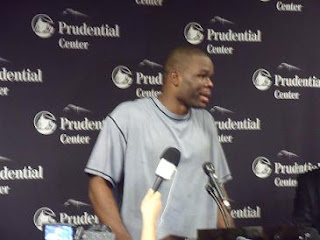 Bryan, a Paterson, New Jersey native, started cautiously, but scored with efficient punches as the round progressed. At times, Mitchell was hesitant to let his hands go, especially when Bryan momentarily trapped him in the corner. At the conclusion of round one, Mitchell claimed he got caught in his left eye by the thumb of Bryan’s glove. As a result, the ringside doctor looked at Mitchell’s eye, and deemed him incapable of continuing.
“THE CHOSEN ONE” SHINES IN PRO DEBUT
Five-time New York Daily News Golden Gloves Champion, Shemuel “The Chosen One” Pagan (1-0), won his first professional fight versus Raul Rivera (0-3) by a four-round unanimous decision in a lightweight bout.
Pagan, a southpaw, landed a barrage of punches to start the bout. First, he hurt Rivera with a straight left to the body in the opening minute of action. Then, Pagan launched an arsenal of vicious head shots.
In round two, Pagan dropped Rivera with a stinging right uppercut - right hook combination. Afterward, Pagan continued to use his superior, blazing hand speed to overwhelm Rivera.
During the third round, Pagan landed a multitude of shots, including consecutive right hooks to the liver area of Rivera. Pagan went on to land some brutal punches in round four, wobbling Rivera after connecting with another right hook to the body. Next, Pagan unloaded a series of lightning-quick flurries to the head and body, but Rivera held his own. Official scores were 40-35 and 40-34 twice.
CHARLES DECISIONS COLLADO
In junior welterweight action, Osnel Charles (4-2) captured a four-round unanimous decision against a sturdy Hector Collado (0-2-1). Official scores were 38-37 twice and 39-37.
Charles dropped Collado with a sweeping, well-timed left hook in the opening round. Yet, Collado closed the distance in round two, landing a thunderous right hand toward the end of the round.
After absorbing another hard right in the third round, Charles landed a swift right uppercut to Collado’s body. However, Collado finished the round strong, hammering Charles with a clean right hand followed by a sound left hook.
Charles was busy in round four, but stood in front of Collado too long. Collado kept charging, connecting with crisp head shots. In the end, the knockdown really hurt Collado on the scorecards.
LUCKEY WINS PRO DEBUT
In his professional debut, Tyrone Luckey (1-0, 1 KO) stopped Larry Yanez (0-1) at :54 seconds of round one in lightweight action. First, Luckey dropped Yanez with a flush left hook. After that, Luckey sent Yanez staggering into the ropes when he connected with a solid right hand. Finally, referee Steve Smoger halted the action after Yanez absorbed three consecutive left hooks to the head.
Posted by Michael Gerard Seiler at 2:08 PM