"The Chosen One" Set To Make Professional Debut

Shemuel "The Chosen One" Pagan, a 5-time New York Daily News Golden Gloves Champion, held a press conference today in Manhattan at the Mendez Boxing Gym to announce his professional debut. He will square-off against 19-year-old Ryan Strickland (1-3, 1 KO) in a 4 round lightweight bout on the undercard of Tomasz Adamek versus Michael Grant on August 21st. Pagan is the only fighter to match Mark Breland's amateur record of 5 New York Daily News Golden Gloves Championships. He is also the only fighter to accomplish the feat in 3 weight classes (2 times at 119 lbs., 2 times at 132 lbs. and once at 141 lbs.), as Breland accomplished it in 2 weight classes (once at 139 lbs. and 4 times at 147 lbs.).

"I am glad to see him win 5 Golden Gloves," stated Breland. "It's a very hard thing to do."

Pagan is extremely excited to enter the professional ranks, and is very proud of his amateur accolades.

Robert Pagan, Shemuel's father and trainer, is a former kickboxing champion. He sees a very bright future for his son.

"Shemuel has that special talent that he can be somebody," explained Robert Pagan. "As long as he does the right thing, he'll be a world champion."

Shemuel Pagan wants to be a positive role-model, and has decided to donate the purse from his 1st professional bout to The Dr. Theodore A. Atlas Foundation. Teddy Atlas, boxing trainer and ESPN2 "Friday Night Fights" commentator, started the organization to honor the memory of his father. The organization focuses most of their efforts helping children, as well as individuals and organizations in need of financial, legal and emotional support.

"When you care more about others than yourself, you're stronger in whatever you do," stated Atlas. 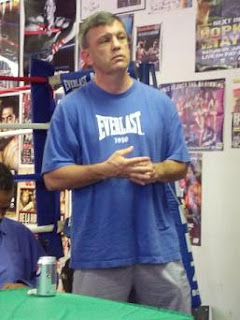