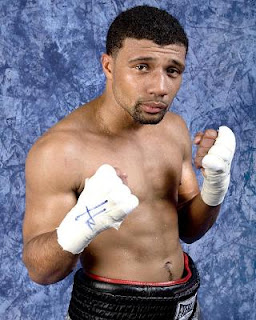 SHAMONE "THE TRUTH" ALVAREZ
On Friday, February 11th, Star Boxing's welterweight contender Shamone "The Truth" Alvarez (21-3, 12KO's) will cross over the border and enter into foreign soil when he takes on Canada's Antonin Decarie (24-1, 7KO's) at the spectacular Bell Centre in Montreal, Canada.  The bout, scheduled for ten rounds, will headline that week's ESPN "Friday Night Fights".  Alvarez-Decarie marks the return of Groupe Yvon Michel's highly regarded FAST AND FURIOUS boxing series, and is presented by the Casino de Montreal in collaboration with Videotron, and Joe DeGuardia's Star Boxing.
The crafty southpaw Alvarez is no stranger to fighting on ESPN, having been showcased on the popular "Friday Night Fight" series numerous times throughout his career.  Alvarez is coming off a very close tough majority decision loss in his last bout, and is looking to get back into the win column and make another charge towards challenging for a welterweight title.
Alvarez and Decarie are no stranger to one another, and have somewhat unfinished business together.  The two were supposed to fight back in 2009, before Alvarez was forced to pull out after suffering a badly sprained knee just days before the fight.  Terrance Cauthen, who Alvarez had previously defeated, went on to replace Alvarez and gave Decarie all he could handle before running out of gas and being stopped with one second to go in the 10th and final round.
Decarie's lone defeat came in May of 2010 when he lost a close decision against Souleymane M'Baye for the interim WBA Welterweight Championship.
Posted by Michael Gerard Seiler at 6:20 PM