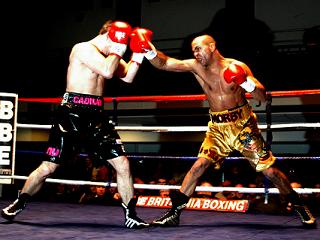 London - Tuesday, 25th January 2011
Former World Champion, turned promoter, Graham Earl today hinted at the possibility of a rematch, between Portsmouth’s Paul Morby and Essex’s Daniel ‘The Slick’ Cadman, after their Southern Area Super Middleweight Title clash on Saturday being declared a draw by referee Jeff Hines.Jeff Hines really had his work cut out as every round was close, many far too close to call. Whilst his decision was probably the fairest, a large percentage of those ringside disagreed having felt Cadman, who had been the far more aggressive of the pair, had done enough to lift the title.This opinion wasn’t restricted to Cadman supporters as became clear when Morby’s manager-promoter Graham Earl spoke earlier today “I’d been running around so didn’t get to see the whole fight, but what I saw was that the fight seemed to be going Daniel Cadman’s wayObviously I manage and promote Paul Morby so having a draw was good for me, as he lives to fight another day really.It did look like he (Paul Morby) was coming on stronger in the final couple of rounds, maybe that was their tactics. I did see, I think it was the ninth round, and Paul seemed to be landing some heavy shots. I think that now Paul’s had this wake up call, he’ll work harder so that we can look to move him on, maybe one more defense, which could well be a rematch in the near future with Daniel Cadman, then we’ll move Paul on to bigger and better things.”The prospect of a rematch between these two closely matched battlers is sure to please the Cadman camp more than Morby’s, after all the draw did enable Morby to retain the title. Graham Earl is expected to be announcing the details of his next show shortly, which may or may not include Morby- Cadman II for the Southern Area Super Middleweight title.
Posted by Michael Gerard Seiler at 11:16 AM