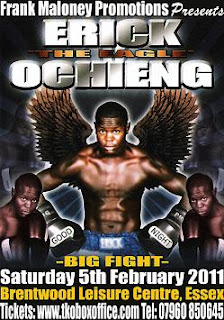 Young Erick has proved to be one of the most exciting and talented young fighters to emerge over the past couple of seasons. Currently unbeaten in five outings, two by way of stoppage, Erick has had some exceptional wins, including beating Curtis Valentine in a fight dubbed “Battle of the Unbeaten’, but by far his most impressive performance to date was his total domination of Alex Spitko at the Steve Goodwin promoted ‘It’s Personal’ event back in September.

On September 11th at York Hall in Bethnal Green  ‘The Eagle’ put on a classic display of the art of boxing. Dominating from the very start, Erick was able to pick off the heavier Alex Spitko at will. His movement so sublime that Spitko must have thought his opponent was a phantom as his punches met just fresh air.

In round two Spitko somehow managed to corral Erick on the ropes and let rip with a flurry, all of which missed the ‘Matrix’ like moving 23 year old. In a flash ‘The Eagle’ turned the tables by fluidly spinning around Spitko before letting rip with a hurting salvo of his own. The crowd leapt to their feet as one cheering and clapping this awesome display.

Spitko became a moving punch bag in round three, the showman inside Erick came to the fore as he turned the volume up and danced around the hapless Spitko picking him off at will.

To the sound of “Eagle. Eagle, Eagle’ reverberating around the auditorium round four gets underway. Erick plays with Spitko like a cat with a mouse, giving him little room to maneuver before closing the the escape route with a lightning quick jab. With just thirty seconds to go ‘The Eagle’ suddenly stops playing with his prey and goes in for the kill with a head and body combination that sends Spitko crashing to the canvas. Spitko made the count but the referee had seen enough and stopped the fight with just 19 seconds left on the clock.

Erick has had a period of inactivity since that top class win, his last outing was due to have been on the undercard of Sam Webb’s title defense against Martin Concepcion on the 16th October, but as if there was an epidemic sweeping the country one after another his proposed opponents dropped out. The last actually on the day of the fight.

Following a sparring session with Bradley Skeete, under the ever watchful gaze of his trainer/manager Brian Lawrence, at the Ultrachem TKO Boxing Gym in Canning Town, London, a positively buoyant Erick spoke of his upcoming fight, as well as his title aspirations. “My next fight is going to be February 5th so I’ve been back in training over Christmas. I’ve already been sparring a lot, which is good. I feel good.

I’ve been sparring Bradley (Skeete) who is a lot taller than me. He has a good reach. It’s the type of sparring that will help me as at my weight you can get much taller people. Prince Arron for instance. So this kind of sparring is good and I like sparring lots of different fighters.

Before he hurt his shoulder I was sparring Sam (Webb). Sparring Sam is great, he’s experienced. He’s the British Champion so it is good practice as I’ll be getting the title soon. It’s good sparring, you can’t go wrong with such good sparring.

I’m stepping up to a six rounder. I get my rounds done in the gym. Saying that I don’t see the fight going the six rounds, it’s going to be shorter than that.

I’m in good shape and I’m really looking forward to it.”

Brian Lawrence, who had sat next to his talented charge throughout, grinned and then added,  “We haven’t got an opponent yet. Frank Maloney is just putting the bill together at the moment. All we know is Jason Booth and Jamie Arthur top of the bill now Sam’s out and Erick’s in a six rounder.

We’ve been training over Christmas and the New Year, he’s in good shape. He’s not reached his peak yet but we’ve still got a couple of weeks to go.

He’s sure to give value for money on the 5th, he always does.”

The not to be missed Erick ‘The Eagle’ Ochieng against a yet to be named opponent will be on the undercard of the Commonwealth Super Bantamweight title clash between Jamie Arthur and Jason Booth at the Brentwood Centre on Saturday 5th February 2011.

Also featured on the card will be a six round Super Flyweight contest which pits former British Bantamweight Champion Martin Power against the unbeaten Ashley Sexton.

Tickets, priced £30, for Arthur vs Booth Commonwealth title fight are available to buy on-line at www.tkoboxoffice.com or call 07960 850645. 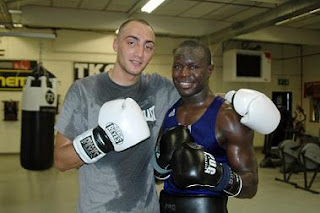 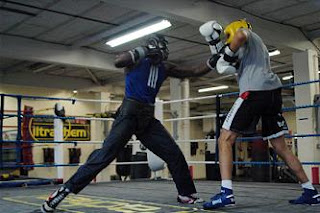