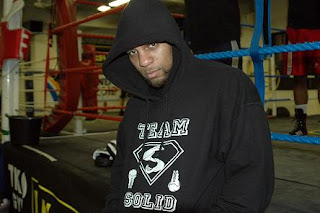 Leon Williams at the Ultrachem TKO Gym in London
London - Wednesday, 26th January 2011
Streatham’s Leon ‘Solid’ Williams gets his first outing, under the Frank Maloney promotional banner, when he faces Blackpool based Slovakian Richard Turba at Brentwood Leisure Centre, Essex on Saturday 5th February 2011, on the undercard of Jamie Arthur vs Jason Booth Commonwealth Super Bantamweight title clash.Williams, ranked #6 in Britain and #77 in the World by BoxRec, is the current BBBofC Southern Area Cruiserweight Champion. Back in October Williams put in a dominating performance to beat former Southern Area Light Heavyweight champion JJ Ojuederie and lift the title by a virtual shutout 99-92 points margin.Come February 5th Williams will have to put in an equally perfect performance as it seems that Frank Maloney is determined to test his latest signing to the max, in this non-championship bout, by matching him with Turba.Turba, who has 5-2-1 record, has stopped four of his opponents, including in his last bout forcing another Maloney fighter, Prizefighter Cruiserweight winner Jon Lewis Dickinson, to retire with a broken jaw.Following a training session, with his new manager and co-trainer Johnny Eames at his Ultrachem TKO Gym in Canning Town, Williams made it crystal clear that he wasn’t fazed at the prospect one iota, “I’ll be up against some guy called Richard Turba, he’s gonna get crushed. It’s my time now. It’s gonna be a really good fight. I don’t back down so someone’s gonna get crushed and it’s not gonna be me. It’s just a six rounder to get me ready for my Southern Area title defense. Not sure when that’ll be or who against.For now I just want to keep busy and build up my record and push for the British, that’s the title I want by the end of the year. That’s my goal.”Leon ‘Solid’ Williams, against Richard Turba will feature on the undercard of the Frank Maloney promoted Jamie Arthur vs Jason Booth Commonwealth Super Bantamweight title clash at the Brentwood Leisure Centre, Brentwood, Essex on Saturday 5th February 2011.Also featured on the card will be a six round Super Flyweight contest which pits former British Bantamweight Champion Martin Power against the unbeaten Ashley Sexton. Commonwealth Gold and Olympic Bronze medalist Heavyweight David Price will be in action against South Africa’s Osborne ‘Big Daddy’ Machimana. In another Heavyweight bout Tom Dallas also gets African opposition, this time in Zambia’s Francis ‘Galagata’ Zulu.Stoke Newington’s exciting unbeaten Light Middleweight prospect Erick ‘The Eagle’ Ochieng is set to face Canning Town’s Costas Osben.Belfast Super Flyweight  Jamie Conlan gets to pit his unbeaten, in five, record against Exeter’s Lewis Browning. Malmesbury, Wiltshire’s Welterweight Joe Hughes gets his second outing against the highly experienced Johnny Greaves from East Ham. In addition Middleweight Johnson McClumpha, Light Welterweight Karl Place, Middleweight Tony Hill, Super Bantamweight Lewis Pettitt, and Welterweight Martin Welsh are also featured, against yet to be named opposition.Tickets, priced £30, for the event are available now direct from Leon Williams. Call Team Solid Ticket Hotline on 07538 150367 or buy on-line at www.tkoboxoffice.com
Posted by Michael Gerard Seiler at 2:07 PM