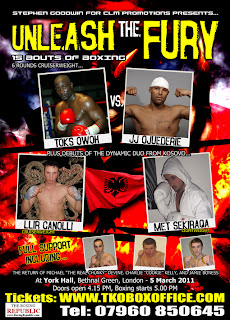 Our main show is at Dagenham on March 19th but we’ve got a lot of people that want to fight on our shows. Basically we’ve created a second show where we’re going to see a lot of upcoming talent, as well as a couple of boxers that have the potential to go to British and European championship level.

Toks Owoh will be headlining the show, he’s desperate to box Southern Area champion Leon Williams. He’s so desperate to fight Leon he says he’d do it for free because he wants to hurt him badly. He says he doesn’t want money for that. He’ll enjoy it. Unfortunately Leon’s got other arrangements, he’s on a Frank Maloney show in February.

Toks is hoping to put on a real good show on March 5th against JJ Ojuederie because he wants to show he can do a better job on JJ than Leon did. But he desperately wants to get Leon in the ring. Toks is after the British title, just the same as Leon is. That could be an interesting match up for later in 2011.

Also on the show we have the World Kick Boxing Champion, Llir Canolli from Cosavo. He’s very, very exciting to see. He is very well regarded and has been tipped to become a Boxing World Champion. So we’re very privileged for him to be coming over to fight on the show. He’s a true Cruiserweight prospect so we’re very excited to be seeing him.

I’m personally excited to see the come back of Michael Devine. He’s a very, very exciting come forward fighter. He lost in his last fight, on his 21st birthday, against Mark Alexander last year.

He took some time out and got himself back together. He’s working like a demon in the gym and I think this is the year we see Michael Devine progress through the ranks. Hopefully by December we’ll have Mark Alexander back in the ring with him so he can set the record straight.

It’s a big card, there will be fifteen bouts on the night. It’s going to be a big card, anything I am associated with I want to be known as giving value for money by the public and make sure that there is always a fantastic atmosphere and packed arenas.

Steve Goodwin’s ‘Unleash The Fury’ event  at York Hall, Bethnal Green, London is headlined by a six round Cruiserweight contest between Toks Owoh versus JJ Ojuederie.

Three Ultrachem TKO gym mates of Daryl Setterfield are also on the show, Light Heavyweight Joel ‘El Toro’ McIntyre, Light Middleweights Nathan Weise and Brett O’Callaghan, all against yet to be named opponents.

Making his first outing as a professional is Highbury Super Featherweight Charlie Kelly who is set to face the highly experienced Birmingham battler Anthony ‘Spanner’ Hanna.

Tickets for Unleash The Fury at the York Hall, Bethnal Green, London on Saturday  5th March 2011 are on sale now - priced £35 (Unreserved) or £60 (Ringside).