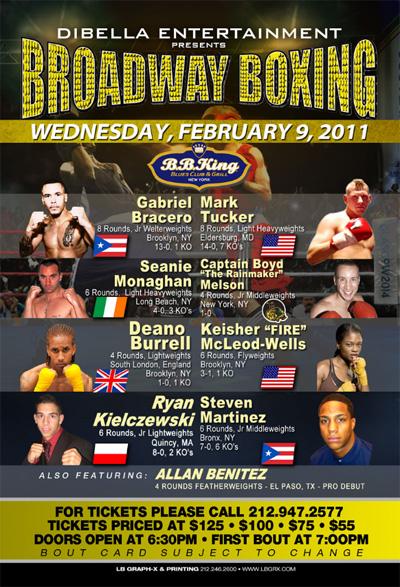 Gabriel Bracero (14-0, 1 KO) was victorious again Wednesday night, taking an eight-round unanimous decision over Chris Fernandez (19-12-1, 11 KO's) in the main event at B.B. King Blues Club & Grill. Official scores were 79-72, and 80-71 twice.
Bracero, 29, had difficulty with Fernandez' constant pressure in round one. Fernandez pressed the action, and did not let Bracero get his punches off.
In round two, Fernandez' punch output dropped, and Bracero started to find his groove, using superior lateral movement and unleashing quick combinations. From that point, Bracero took full control of the fight in front of a boisterous crowd cheering for him.
In round four, Bracero found his range and Fernandez began following him around the ring.
Although Bracero lacks knockout power, he is able to overwhelm his opponents with his swift hand speed and large volume punching. In round five, he hurt Fernandez with a rapid right cross - left hook combination to the head. Fernandez backed into the ropes, but Bracero could not finish him.
By round six, Fernandez lost the steam on his punches. However, Fernandez got a second-wind in rounds seven and eight, closing the distance between them. Yet, Bracero used his first-class boxing skills to move in and out smoothly en route to another win.
Mark Tucker (15-0, 7 KO's) remained unbeaten, scoring a six-round unanimous decision over Ray Smith (9-5, 3 KO's) in a light heavyweight bout. Official scores were 59-55 on all three judges' scorecards, however, the bout was closer than the scores indicate.
Tucker, 23, dazed Smith with a right hook in the first round.
In round two, Smith pushed Tucker back, scoring with a right to the body.
Smith connected with a five-punch combination early in round three, as Tucker lay against the ropes.
Tucker, a southpaw, displayed a solid chin after taking a flush right hand from Smith in round four.
In the final two rounds, both fighters shared some dazzling moments, connecting with clean, but not overwhelmingly effective blows.
Light heavyweight Seanie Monaghan (5-0, 4 KO's) scored a third-round stoppage versus Angel Gonzalez (2-4, 2 KO's). The ringside doctor stopped the bout at the end of round three. Gonzalez vehemently protested the doctor's ruling.
Gonzalez showed a ton of heart, but was getting nailed repeatedly with a series of clean left hooks and right hands to the head from Monaghan. He gave Gonzalez a bloody nose in the third round after striking him with a devastating right. Monaghan thoroughly assaulted Gonzalez' body too, although he was tiring just before the stoppage was announced. Monaghan's next appearance will be March 12th on the undercard of Martinez - Dzinziruk.
Junior middleweight Boyd Melson (2-0) improved his record with a controversial, four-round majority decision against Marquise Bruce (0-1-1). Official scores were 38-38, and 39-37 twice.
Bruce caught Melson with a sharp left uppercut in round two. Next, Bruce tagged Melson with a left hook that left him slightly dazed. Bruce's steady pressure dictated the pace in the first two rounds.
Melson came on strong in round three, connecting with a punishing straight left to Bruce's face.
Bruce got his punches off before Melson for most of round four. Melson exchanged blow-for-blow with him. In the final seconds, Bruce landed a big right hand.
Keisher McLeod-Wells (4-1, 1 KO) captured a six-round unanimous decision win over Melissa McMorrow (4-2-3) in a highly-contested flyweight battle. Official scores were 58-55, and 57-56 twice. McMorrow brought a tremendous amount of pressure in rounds one and two, hammering away at McLeod-Wells relentlessly. McLeod-Wells worked behind a steady left jab, but lacked the power to significantly hurt McMorrow. However, McLeod-Wells scored a knockdown in round six when she landed a right, resulting in McMorrow's right glove touching the canvas.
Junior lightweight Ryan Kielczewski (9-0, 2 KO) won 60-54 on all scorecards versus Wilshaun Boxley (6-8-1). Kielczewski controlled the contest by utilizing a stinging left jab. As each round passed, Kielczewski increased his punch output, and inflicted damaging blows to Boxley's head and body. In the closing seconds of the fight, Kielczewski attacked Boxley ferociously to the body with a series of left hooks, followed by a powerful right to the face that sent him staggering into the ropes. Kielczewski's next bout will be on the undercard of Martinez - Dzinziruk on March 12th.
Sidell Blocker (1-3-1) upset Deano Burrell (1-1, 1 KO) in a four-round lightweight bout. Official scores were 37-36, and 38-37 twice.
In the first round, Burrell sustained a cut right eye, resulting from an accidental clash of heads. After that, Blocker landed a lighting-quick right that dropped Burrell.
Again, Blocker scored a knockdown in round two after peppering Burrell, a southpaw, with a barrage of punches. When Burrell got back up, he answered with some wide right hooks. Then, he started to land straight lefts to Blocker's face.
In round three, Burrell was winging right hooks, but started to show fatigue.
Both guys battled in close quarters in the final round, although it was a little too late for Burrell to make an impact on the judges' scorecards.
Steven Martinez (8-0, 7 KO's) scored a sensational first-round stoppage at 1:11 against Ishwar Amador (11-9, 7 KO's). Martinez, 20, stunned Amador with a fierce left hook to the head. From there, Martinez dropped him with a firm right to the face. Moments later, Martinez connected with a solid left hook to Amador's body, and followed it with a sequence of right hand shots until referee Earl Brown halted the action.
Featherweight Joseliz Cepeda (3-1) scored a four-round unanimous decision victory over Allan Benitez, who was making his professional debut. Official scores were 40-36, and 39-37 twice.
Benitez gave up an enormous reach advantage to Cepeda, and had a great deal of trouble closing the distance the entire fight. As a result, Cepeda was able to swarm him with a large volume of punches en route to victory.
Posted by Michael Gerard Seiler at 8:13 AM