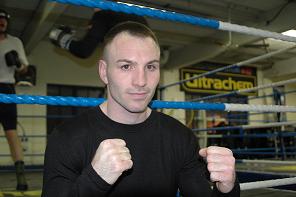 In spite of being designated as the opponent Colin showed that the ten months out of the sport had not affected him one iota, neither had the move from Light Welterweight to Welterweight, if anything it improved his performance in the later rounds.

Pryce came back strong in the sixth and tried to bully his way through Colin. Pryce won his first round of the contest by being by far more assertive than he had in the early rounds as well as landing some telling shots.

More of the same came in the seventh and at one time Pryce managed to corral Colin on the ropes. Pryce’s late charge was paying dividends but at this point he really needed a knockout to stand any chance of securing the win.

Pryce kept the pressure up in the final round but Colin was savvy and just plain boxed his way to a well earned points victory.

Earlier today I spoke with Colin on phone about the fight, as well as his future plans. “I’m really, really pleased. It was a calculated risk but we knew we were right in ourselves and knew I was ready for up to ten rounds. So it’s all good and it’s onwards and upwards and we’ll start looking for titles.

I well won it, but I was treated like the away fighter. I think they thought that he would deal with me or get me out of there. A lot of boxing people thought the same, as it was my first fight back in nearly a year. Bradley was getting ready for Sam Webb so he was sort of championship training.

People were hoping I would be capable of dealing with him but  realistically I think a majority of people thought he would deal with me or get me out of there.

He started to come back in the middle rounds a bit. His corner told him to go out there and get this kid out of there so he had a round or two where he tried to be the bully again but Jimmy instructed me to get back out there and take command of the centre ring, so I did.

There’s still loads to be done, that’s just with me being with Jimmy and Mark since the Summer. They’ve just been getting me into shape and now their talking about getting me back into the gym soon and getting down to some proper championship training, so I’m only going to take a couple of weeks out and then I’ll be back in the gym and next time I’ll be a lot better.”

Following the conversation with Colin I spoke with his new coach Jimmy Tibbs, at the Ultrachem TKO Boxing Gym in Canning Town, London, who added, “Good comeback fight after ten months out of the ring. Stamina was very well, little bit ring rusty.

I’ve got to say that he fought a man that was ready to fight for the Light Middleweight Championship of Great Britain, that was against Sam Webb.

Bradley Pryce was what you would call a big Light Middleweight and he looked it. You could see the difference in size that night. But there’s no complaint from our side, we knew what we walking into.

He done his job, stuck to his orders. I was very pleased with him

I believe he could have another couple of warm up fights and easily step into the British Welterweight title.

He done a great performance and Mark (co-trainer Mark Tibbs) and myself are both very proud of him.”

Colin and Jimmy have made it crystal clear that Championship honours are well and truly in their sights. I am sure that is pleasing news to his legion of loyal fans, as well as boxing fans the World over, that one of our great champions, and one of the nicest guys in the sport, is set for a revival.
Posted by Michael Gerard Seiler at 2:28 PM