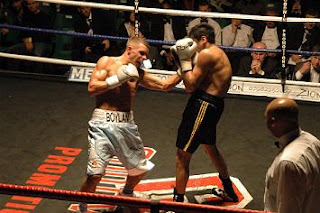 London - Monday 14th February 2011
Carshalton’s ‘Pretty’ Ricky Boylan has a busy month ahead of him, with two fights scheduled just a few weeks apart, as he prepares to establish his credentials as one of the future stars of the British Lightweight division.

Back in December the former London ABA finalist impressed on his professional debut, against Birmingham’s Sid Razak at the excellent ‘Judgement Day’ event.

It was hard to think that Boylan was debuting, as his performance was exceptionally slick and mature in it’s approach. Round after round Razak was having to cover up as Boylan peppered him with solid combinations to the head and body.

In the final round ‘Pretty Ricky’ changed tactics and boxed on the back foot but still Razak was unable to get any semblance of control due to Boylan’s impressive movement and powerful combinations. Surprisingly the referee deemed the fight as a 59-56 points win for ‘Pretty’ Ricky and not the clear shut out it was.

Boylan’s scintillating performance not just grabbed the headlines but also the attention of promoters Miranda Carter and Steve Goodwin, who were quick to invite him to fight on their upcoming shows.

The first of these events is this coming weekend, when 22 year old Boylan faces the experienced Welsh banger Craig Dyer, at the Miranda Carter promoted ‘The Force of Destiny’ event at York Hall in Bethnal Green, London, on Sunday 20th February 2011.

Just four weeks later, on Saturday 19th March, Boylan will make the trek from his Surrey home to the Goresbrook Leisure Centre in Dagenham, Essex, where he will go against the even more experienced Kristian Laight at the Steve Goodwin promoted ‘Essex Eruption’ event.

Following a training session at Johnny Eames’ Ultrachem TKO Boxing Gym in Canning Town, London, ‘Pretty’ Ricky took a few moments out to talk a little about his upcoming fights. “Yeah I’ll be out twice in the next month, It’s good, I want to be busy so I’m really pleased about this.

I said to Johnny (Eames) I just want to be busy this year so it’s good to get two within the month. It’s all good.

On the 20th February I’m fighting Craig Dyer on Miranda Carter’s show at York Hall. His record aint the best but he’s tough, comes forward and he’s strong. I’ve got to stick to my boxing.

Then I’m boxing on the 19th March as well on a Steve Goodwin show in Dagenham. I’ll be against Kristian Laight.

I made a few mistakes on my debut, I was watching a few things. I’ve got to sometimes sit back and look for the opportunity before I throw my shots, instead of just throwing them for the sake of throwing them.

But, I’ve just had the one pro fight so I’m still learning.

I’ll be three and 0 by the end of March hopefully.”

Tickets for ESSEX ERUPTION are priced £35 (Unreserved) or £60 (Ringside) and on sale NOW.