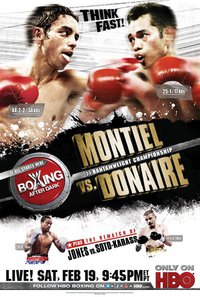 The "Filipino Flash" Nonito Donaire (26-1, 18 KO's) scored a scintillating 2nd round, one-punch knockout versus Fernando Montiel (44-3-2, 34 KO's), capturing the WBC & WBO Bantamweight titles. Donaire, 28, gave Montiel, 31, problems with his high-caliber speed and agility, landing a crisp left hook over Montiel's right cross that misfired early in round one. The same sequence would repeat itself later in round two with disastrous effects for Montiel. He displayed a great deal of trouble getting close to the lightning-quick Donaire, who found his range by utilizing feints and employing superior lateral movement.

In round two, Montiel missed with a right cross again before Donaire landed a powerful counter-left hook to his head, only this time it was more precise and damaging. After Montiel was struck, he dropped instantly to the canvas, his legs twitching rapidly as he lay flat on his back. Miraculously, Montiel got back up ahead of the ten count, however, he was clearly out on his feet. Yet, referee Russell Mora gave Montiel a chance, although Donaire vigorously charged forward, connecting with a clean left hook - straight right combination to Montiel's chin, prompting the bout to be halted. Official time of the stoppage was 2:25.

Donaire continues to put on his best performances in his biggest fights. Since 2007, Donaire has stopped nine of his last ten opponents, including a fifth-round TKO win over a previously unbeaten Vic Darchinyan, a victory that might be Donaire's second career best when compared to tonight's showing. Rafael Concepcion, who lost a twelve-round unanimous decision to Donaire in 2009, was the only fighter to the last the distance with him in that time span. Undoubtedly, Donaire has now proven that he belongs among the discussion of the top pound-for-pound fighters in the world with another stellar appearance.

Soto-Karass controlled the pace of round one, as Jones readily backpedaled to avoid his constant pressure.

In round two, Soto-Karass scored with a right uppercut to Jones' body, but Jones started dictating the flow of the round with his methodical left jab and slick counter punching ability.

Soto-Karass relentlessly pressured Jones again, landing solid rights to his body and head during round four.

Jones was controlling the action in round six when Soto-Karass hurt him with a sound right to the face. As a result, Jones received an abrasion on his left cheek slightly under his eye. Although Soto-Karass successfully landed that punch, he was starting to fatigue and appeared one-dimensional.

Soto-Karass' punch output significantly dropped by round eight, enabling Jones to circle to his left easily, and land a series of right and left uppercuts.

Jones slowed Soto-Karass' body attack in round nine, repeatedly striking the 28-year-old Mexican warrior in the body with hard right-hand shots. After that, Soto-Karass and Jones' foreheads collided fiercely, but neither man endured a cut.

The ringside doctor looked carefully at Soto-Karass' eye in round ten, but allowed him to continue fighting. By this point, Soto-Karass was absorbing enormous punishment from Jones, who landed clean, sharp punches at will.

Soto-Karass, bloodied and exhausted in round eleven, was sent into the ropes after Jones hurt him with a definitive right uppercut to the face.

Jones calmly boxed in the twelfth round, as a gassed Soto-Karass courageously brought steady pressure until the final bell.
Posted by Michael Gerard Seiler at 10:06 AM