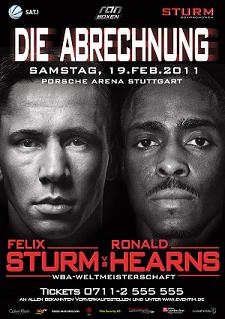 Sturm, 32, worked behind a steady, spirited left jab that continuously found the target. Hearns moved well laterally and used his left jab repeatedly, but he was unable to penetrate Sturm's high defensive guard. His punches had little or no effect, which enabled Sturm to consistently press the action.

Sturm controlled the contest comfortably throughout the first four rounds. During the first 1:30 of round five, Hearns was exceptionally fluid with his shots, taking a multitude of chances to break Sturm's unyielding defense. In the closing moments of the fifth round, Sturm connected with a right cross - left hook combination to Hearns' head, briefly dazing the 32-year-old from Southside, Michigan, U.S.A.

In the seventh round, Sturm landed a quick left jab, and followed it with a sharp, straight right to Hearns' face. Hearns, who was trapped in the corner, momentarily dropped his hands. Sturm immediately capitalized, landing a devastating, flush right cross. Referee Raul Caiz, Jr. instantly halted the bout at 2:30.
Posted by Michael Gerard Seiler at 6:26 PM