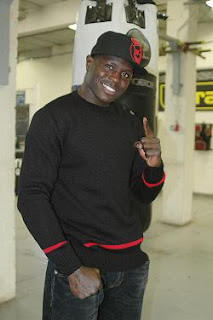 Ochieng’s opponent, the reigning British Masters Light Middleweight Champion  Lee ‘Lightning’ Noble, clearly didn’t come to fight,  instead he just closed up shop and pulled down the shutters, in a similar way that he did against Ochieng’s Ultrachem TKO  Gym mate ‘Phat’ Pat McAleese back in September.

‘The Eagle’ had been ringside when Noble knocked out a tiring McAleese - who had thrown a hundred plus punches for over eight rounds - in the ninth with more or less his first real punch of the fight.

On Saturday Ochieng showed a maturity that belied his tender years, by choosing a more patient route than McAleese, by using his jab to good effect and waiting for the opportunity to open up Noble’s fortress like defense.

After six rounds no real opportunity had arisen and judge Ken Curtis rightfully declared the fight a shutout 60-54 points victory to ‘The Eagle’.

Earlier today Ochieng popped into the Ultrachem TKO Gym in Canning Town, whilst there he gave his view of the fight as well as announced the exciting news regarding his next fight. “I thank God for the victory man. Lee was quite heavy, he was eleven-eight and I was eleven-three.

That’s all he did was cover up and sometimes used his jab. He’s quite strong but he didn’t want to give me any openings or make a fight of it.

I was in great shape and was ready for any opportunities. He should have opened up and come to fight. I came to fight but he didn’t want to know, he just covered up and stayed out of trouble.

At the end of the six rounds I won, I still won. I feel good, that’s six in a row. Yeah and now my next fight will be for the Southern Area title.

I have such great fans, they were standing shouting ‘Eagle, Eagle, Eagle’ throughout. I was disappointed for them that he didn’t want to make a fight of it. They still kept chanting though.

I have such great fans and can’t thank them enough for the great support. Thanks, you guys are the best fans in the world.”

It is expected that an announcement will be made soon on the date and opponent for Erick ‘The Eagle’ Ochieng’s challenge for the Southern Area Light Middleweight title - Watch this space. www.tkoboxinggym.com
Posted by Michael Gerard Seiler at 1:23 PM