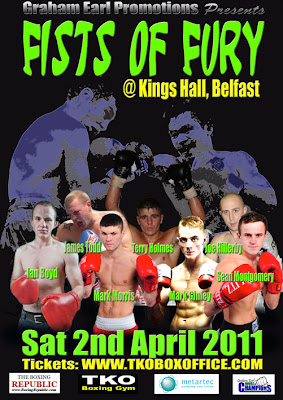 Graham, who over the past year or so has been scouring Northern Ireland for up and coming young boxing talent, will be showcasing many of his latest Irish signings as well as bringing a couple of his established British boxers to Belfast.

Heading up the list of local fighters is Joe ‘Belfast Banger’ Hillerby, who will be making his third outing as a pro.

On his pro-debut, at the Northampton Cricket Ground in October 2010, Hillerby caused a sensation when he stopped Luton’s Gavin Putney in just 43 seconds of the first round.

Hillerby followed this up with a shutout points win over the excellent Ryan Clarke at York Hall in January.

The normally fast starting Clarke seemed a little more cautious than normal, possibly due to Hillerby’s stunning first round stoppage of Putney a couple of months earlier, which allowed Hillerby to take the first couple of rounds by forcing the pace throughout.

Round three see the real Ryan Clarke emerge. Normal service is resumed as Clarke starts letting rip with heavy hands. Hillerby is made of sterner stuff though, standing his ground and trading with equal venom. Much closer round but Hillerby still gets the nod.

More of the same in fourth with Clarke throwing everything but the kitchen sink in an effort to stop the advancing juggernaut known as the ‘Belfast Banger’. No surprise to anyone that Hillerby came out the winners in this one.

Another Belfast boy, Ian Boyd, is also set for his first home town fight. Boyd will be looking to get the fist win on his record, having lost on his debut to Lincoln’s Rick Boulter by a very close 57-58 points margin back in October.

In addition to Hillerby and Boyd there will be no less than six Belfast boys, Mark Morris, David Rosbotham, Mark Ginley, Sean Montgomery, Padraig McCory and James Ferrin making their professional debuts on April 2nd.

Todd, a former Team Calzaghe member, is used to fighting away from home having fought twice in America, including his unsuccessful WBF title challenge against Ugandan Mohammed Kayongo in Saint Paul, Minnesota.

Having lost both his American fights Todd will be looking to get his career back on track with a good win in Belfast.

Graham will also be bringing over exciting unbeaten Light Welterweight Terry Holmes, who has impressed on his two previous outings, having out pointed both the experienced Johnny Greaves and Cassius Connor by shutout 40-36 point margins.

‘Fists of Fury’ will also feature Miami, Florida’s Emmanuel (Manny) Oshunrinde, a former professional Basketball player turned boxer. Oshunrinde will be looking to secure his first UK win, having lost on his debut and having the misfortune of having a clear first round TKO win on his record reduced to a Technical Draw under the new BBBofC rule introduced earlier this year.

At Graham’s ‘Capital Punishment’ event in January Oshunrinde faced the tough Jahmaine Smyle. Both protagonists started fast, however Oshunrinde quickly took control with his superior jab, often forcing Smyle backwards. Around half way through the round Oshunrinde again sent Smyle backwards, but this time followed up and let rip with a big left-right to the head.

Smyle covered up quickly, but not quick enough to stop another heavy straight right. Oshunrinde looked set to continue the onslaught but the eagle eyed referee had spotted the blood gushing from a cut above Smyle’s eye and called a halt to the proceedings.

Tickets for the Graham Earl Promoted ‘FISTS OF FURY’ event at the Nugent Hall, Kings Hall, Belfast on Saturday 2nd April 2011 are now on sale and priced £35 (Unreserved) or £50 (Ringside).