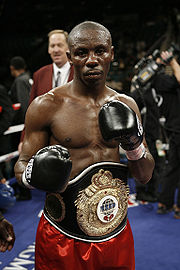 CHICAGO, IL (February 28th, 2011) People’s Champ Boxing (PCB) is very pleased to announce the signing of world title contender Cornelius Lock to an exclusive promotional contract. Mike Leanardi, CEO of PCB had this to say when announcing the deal; "I am very excited to welcome Cornelius Lock to People's Champ Boxing. Corn is truly a world-class fighter who has an electric style and is a great addition to our team." Lock, a former WBO NABO Champion, is currently ranked as the #11 featherweight contender in the world by the IBF.

Lock, also excited about the deal had this to say, “The media said it was over for me, I’ve been reading that type of stuff and it further motivates me. They haven’t seen the last of Lightning Lock, he’s back!”

Neither promoter nor boxer minced words regarding the goal of the new team: "After Corn gets a win or two under his belt, we will be looking for a world title fight and to win that title. We both have great confidence in Corn's abilities and he has the heart of a lion. Because of that we know with the proper preparation he'll be a world champion" said Leanardi. While Lock added, “The goal was always to win a world title and nothing has changed that. I know I can compete with anyone in the world and my fans still haven’t seen me at my absolute best.”

This combination was spawned from friendship that turned into a wise business decision for both parties Leanardi explained, “"I have known Corn personally for awhile now and I feel that helped make this a very easy deal to make. We got together and talked about where we think he is in his career and where he can still go. When it came down to it, we were in complete agreement and therefore; we decided to move forward." Lock echoed the sentiment of his new promoter, “I have known Mike for awhile now and once we talked everything over, this was a no-brainer. I had other promoters interested in me but it came down to being on the same page and being in a comfortable situation.”

Lock joins PCB’s already impressive stable of fighters that includes Sande Otieno, Jermaine “Hawk” White and Jimmy “The Fightin’ School Teacher” Holmes. PCB will be announcing Lock’s next bout in the near future.

For more information regarding People’s Champ Boxing, please visit their home on the web at www.PeoplesChampBoxing.com, join their fan page at www.facebook.com/PCBoxing and follow them on twitter @PCBoxing.
Posted by Michael Gerard Seiler at 5:25 PM