Part 1 - Welcome to Camp
Mexico City, MEX (March 10) - The countdown to one of 2011's most exciting nights of boxing has begun and the stars of the April 9 "Action Heroes" main event Erik "El Terrible" Morales and Marcos "El Chino" Maidana are deep in training. Each week camp notes will be distributed to update media and fans on training camp happenings leading up to fight night at MGM Grand in Las Vegas, Nev. which will be televised live on HBO Pay-Per-View®. 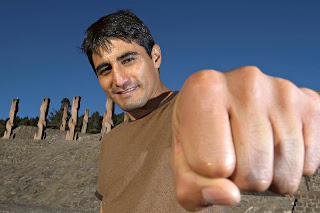 Morales poses at his training facility in the Centro Ceremonial Otomi.
Photo Credit: Etzel Espinoza/Golden Boy Promotions
ERIK "EL TERRIBLE" MORALES - RIGHT AT HOME
Camp Location: Centro Ceremonial Otomí in Toluca Estado, Mexico
It's back to the familiar for Erik "El Terrible" Morales, who is training at the Centro Ceremonial Otomí in Toluca Estado, the site he where trained for many of his most memorable fights including his legendary trilogies against Barrera and Pacquiao. Morales ended his two-year retirement 11-months ago and has scored three consecutive wins. Now, he is preparing for one of the biggest tests of his 18-year career, 12 rounds against boxing's "Master of Mayhem," Marcos Maidana.
"Everything in the gym has been great," said Morales. "I am preparing for a battle. I am doing everything according to Maidana's skill level."

Training over 3,000 meters above sea level over an hour away from the hustle and bustle of Mexico City has its advantages, as Morales is able to concentrate on getting in championship fighting shape away from the distractions of everyday life. However, during his down time he catches up on his emails, reading books and playing dominos with members of his team.

Morales' team includes his father, Jose"Olivaritos" Morales, who has been in his son's corner his entire career as well as other returning members of his camp Fernando Fernandez and Tiburcio Garcia, who help Morales with mitt work in the gym.

"I am confident in my preparation for this fight," Morales continued. "I am looking forward to establishing an unbeatable plan and a great strategy to get the victory I know I can get on April 9." 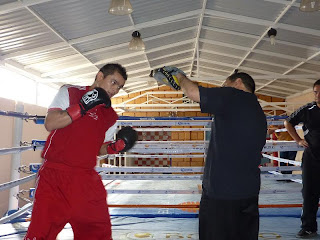 In preparing to face one of Mexico's greatest boxing legends, Marcos "El Chino" Maidana has immersed himself in Mexican culture, society and atmosphere. He is not only training in Mexico City for the first time in his career spaning 31 professional fights, but has also teamed with veteran trainer Rudy Perez, who knows a thing or two about defeating Erik Morales. Perez successfully trained Marco Antonio Barrera to beat Morales in two of their three epic battles; Morales vs. Barrera II and III taking place on June 22, 2002 and November 27, 2004 respectively.

"I am not training in Mexico to spite Morales in any way," said Maidana. "I feel comfortable with the Mexican people. I feel accepted by them and if I knock Morales out like I know I can, it is my hope that the Mexican fans will adopt me as their own. I have been told many times that I have a Mexican fighting style and I hope to develop that more as I train in Mexico."

In addition to surrounding himself with all-things Mexican, Maidana is taking advantage of the altitude in the capital city (2,200 meters above sea level). He rises early (5:00 a.m.) and starts the day off with intense roadwork as he adapts to the high altitude. He then returns to his apartment to eat breakfast and rest. In the afternoon he heads to either the Boxeo de Gala gym or Pino Suárez gym for sparring, strength training and to work on his technique.

Maidana, who has trained in Las Vegas for several of his recent fights, will depart his new-found Mexican home and head to the familiarity of the desert on March 15 as his strength and conditioning coach, Cruz "Pensa" García, believes that five weeks is enough time for Maidana to spend training at high altitude.

"Working out in Mexico has been a great experience so far," said Maidana. "But a combination of the altitude in Mexico City and the familiarity of Las Vegas is what I need to get the result I want in the ring on April 9."


"Action Heroes" featuring Morales vs. Maidana in a 12-round junior welterweight bout and Guerrero vs. Katsidis in a 12-round lightweight battle is presented by Golden Boy Promotions in association with Erik Morales' Box Latino and Universum Box Promotions and sponsored by Cerveza Tecate, AT&T, DeWalt Tools and Tres Generaciones. Guerrero vs. Katsidis is presented in association with Sampson Boxing. The bouts will be produced and distributed live on HBO Pay-Per-View beginning at 9:00 p.m. ET/6:00 p.m. PT.
Tickets for "Action Heroes" priced at $350, $250, $150, $75, $50 and $25 are on sale now and available to charge by phone with a major credit card, call Ticketmaster at (800) 745-3000. Tickets also are available for purchase at www.mgmgrand.com or www.ticketmaster.com.

The Morales vs. Maidana pay-per-view telecast, which begins at 9 p.m. ET / 6 p.m. PT, has a suggested retail price of $44.95, will be produced and distributed by HBO Pay-Per-View® and will be available to more than 71 million pay-per-view homes. The telecast will be available in HD-TV for those viewers who can receive HD. HBO Pay-Per-View®, a division of Home Box Office, Inc., is the leading supplier of event programming to the pay-per-view industry. For Morales vs. Maidana fight week updates, log on to www.hbo.com.
Posted by Michael Gerard Seiler at 4:16 PM