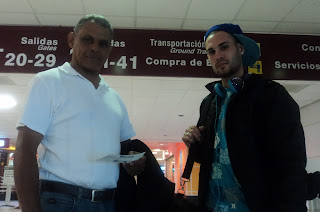 Jose Pedraza and his father/trainer Luis Espada pose for a picture at the airport in San Juan, Puerto Rico before taking off for Pedraza’s first pro bout in the United States. Credit: Ricardo Rodriguez-Rivera.
On Wednesday afternoon, 2008 Puerto Rican Olympian Jose Pedraza arrived in New York City. And while he prepares to fight as a professional for just the second time, Pedraza is well on his way to arriving at boxing superstardom. Pedraza (1-0, 1 KO) headlines Broadway Boxing presented by Coors Light from the BB King Blues Club in Times Square on Tuesday, March 29, against Springfield, OR native Corben page (1-1).

“I’m very excited for this opportunity to fight internationally for the first time,” said Pedraza upon arriving at New York’s John F. Kennedy Airport. “The camp has been going great and I'm working on a few new things to show the fans in New York.”

Pedraza is one of the most decorated amateurs in Puerto Rican boxing history. He took home the Gold medal in the 2010 Central American and Caribbean Games, won a Silver medal in the 2009 World Championships, and won Bronze at the 2007 Pan American Games. He competed for Puerto Rico in the 2008 Olympics. Pedraza turned pro in 2011 under the joint promotional banner of DiBella Entertainment, Gary Shaw Productions, and Universal Promotions.

In the co-feature, unbeaten junior welterweight Willie Monroe, Jr. (10-0, 4 KOs) takes on the stiffest test of his career in veteran Darnell Boone (17-17-3, 7 KOs).
Posted by Michael Gerard Seiler at 4:54 PM