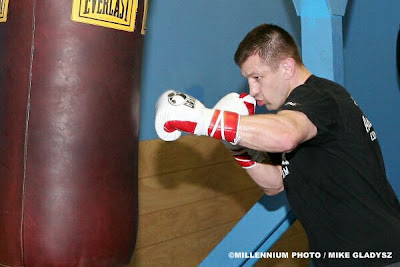 "Fighting Kevin McBride is a good test for me. We had a good camp. I am in the ring with Roger every day. I am six, seven weeks training very hard. As you know, Roger changed me a lot. I have more movement. When I punch somebody I hit them up. I am more flexible in the ring, I can change. I feel I can fight anybody and win."

"Size, yes it is very important, but not the best. I'm not short, but when I am fighting I'm moving my head, bending my knees, moving side to side, being flexible, making it hard to touch me. With every fight I think it gets more difficult to hit me."

"A lot of people say 'why do you fight before the Klitschko fight and take a chance?' You know every fight is a danger, but I can't stay home and sit with nothing to do. I need to practice. Every day I learn a little bit, and a little bit more, this is my way. It will only help me prepare."

"The Solis fight was only two minutes, but two times he hit him (Klitschko) very easy. I think, and Roger said too, a short guy with a tall guy is never a good opponent, because they are difficult. It is difficult to hit (the short guy) because he is down. Valuev said the same thing after fighting Haye; he said he never fought a guy like David. David was like me, we are quick and uncomfortable to fight."

"People say I cannot beat the Klitschko's because I am too short, that I can't fight heavyweight. But when I started fighting heavyweight I beat Arreola, and next Grant, and every fight is better. I love not being the favorite because I want to make it a surprise and become the heavyweight champion."

"I think the worst opponent is a quick opponent because they can do anything. I am faster than a big heavyweight. My legs are very good. This is not the street, it is the ring, whoever is the smartest will win. I will show my class on April 9th and win."

The Adamek - McBride fight will be the main event on the April 9th card at Newark's Prudential Center. The card is presented by Main Events & Ziggy Promotions. Doors open at 6:45pm, first fight 7:00pm.

Adamek vs. McBride will be distributed in the United States and Canada by Integrated Sports Media for live viewing at 9 PM/ET - 6 PM/PT on both cable and satellite pay-per-view via iN Demand, DIRECTV, DISH Network and Avail-TVN and Canada via Viewer's Choice, Bell TV and Shaw Cable PPV for a suggested retail price of only $29.95