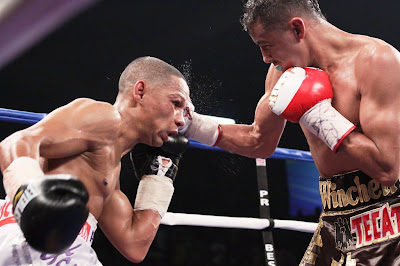 “La Revancha: Segura-Calderon 2,” presented by Zanfer Promotions and PR Best Boxing, will be distributed in the United States by Integrated Sports Media for live viewing at 9 PM/ET – 6 PM/PT on both cable and satellite pay-per-view via iN Demand, DIRECTV, DISH Network and Avail-TVN, for a suggested retail price of only $39.95.

Segura (26-1-1, 22 KOs), fighting out of Bell, California by way of Mexico, captured the WBO, The Ring and WBA Super light flyweight titles last October, when he knocked-out the previously unbeaten champion Calderon (34-1-1, 6 KOs) in the eighth round in Puerto Rico. Segura was leading (69-64, 68-65, 67-66) on all three judges’ scorecards at the time of the stoppage.

“This time he’s coming off of a loss that I gave him,” Segura said. “And we won’t be fighting in his home, Puerto Rico, where he was used to fighting. I’m hoping he reacts differently fighting in Mexico. The only I real advantage I have fighting in Mexicali is the support of the people, but everything else will be the same for both of us – rules, referee, gloves and ring.

“Calderon’s plan will be to stay away from me. He’ll try running around the ring – that’s the way he fights – but the first moment he feels my punch his running will be behind him and I’ll stop him, hitting up and down. He already knows how hard I punch and he must be worried. He has to stay away to make sure I don’t beat him but I will stop him to win.”

The 28-year-old Segura, who will turn 29 the day before his fight against Calderon, also holds notable victories against Daniel Reyes KO1) and Carlos Tamara (DEC12). Giovanni has fought only once since defeating Calderon, last November in a non-title fight triumph against Manuel Vargas who retired after seven rounds.

“I see this fight going the same as the first one (one of the 2010 Fights of the Year),” added Segura, who has dedicated this fight to his son’s birth in July. “It’s going to be a war except it’ll be harder for Calderon because he knows my punching power. I’m working out in the gym as hard as I can. Another motivation factor for me is facing a Puerto Rican challenger. There’s always a rivalry between Mexican and Puerto Rican fighters. As a Mexican, I want to increase the number of Mexicans defeating Puerto Ricans. I’m been training real hard in Los Angeles, doing the same routine, running in parks, beaches and Mountains – all to beat Calderon! I had a Japanese sparring partner and right now there are three Latinos. We are at a strong time of preparation, almost ready but close enough to slowdown the rhythm.

“I will win. I don’t know how but I will look for a knockout, again in the eighth round. I’m not looking past this fight, but I’ll be looking for a fight against any of the 112-pound world champions. This is my last fight at 108 pounds. I’d like to make my first fight, as soon as possible, against WBO flyweight champion (Julio Cesar) ‘Pingo’ Miranda. I always go directly for what I want and had no doubts of my triumph in Puerto Rico. Nobody can make me doubt my abilities, I am a warrior.”

For more information about the Segura-Calderon 2 PPV event go to www.integratedsportsnet.com. Follow Integrated Sports Media on Twitter @IntegratedPPV.
Posted by Michael Gerard Seiler at 11:16 AM