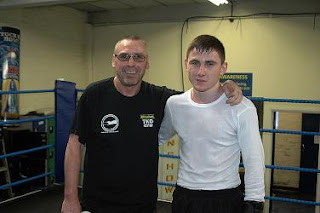 Back on the 20th February, at the BUCS competition Jake dominated the 63.5kg final, against Portsmouth’s Richard Tyler, with his superior boxing skills to secure the Gold medal by a 35-26 points margin.

Following a training session with Johnny Eames at the Ultrachem TKO Boxing Gym in Canning Town, London, 19 year old Jake spoke briefly on his Gold winning performance and his future plans. “I just won Gold at the British University Championships, hopefully this will get me going further and people will recognise me more as I want to box for England, hopefully. I want to get into some international competitions.

It was a good fight for me and went well. I knew my game plan when I see that he was quite short and stocky, so when he came out I thought I’d box him.

First round I was doing well, teeing off and keeping him in range. Then he started getting in so I started letting heavy shots go. I was catching him with body shots and everything.

Second round same thing. Third round was toe-to-toe and just warred it out. I didn’t take many punches at all. I had quite a high guard, sticking behind my jab and sinking in the body shots. When his head was free to hit I hit him in the head, scored points. I won by nine points in the end.

My preparations were really good. Been coming down here to the TKO because of the good sparring and trainers. It’s a great opportunity for myself as I’d love to turn pro, obviously the big dream is to be a World Champion, but obviously it’s just to see how far I can go.

I think I am more suited to the pros but right now I’m at University and it’s right full on so I want to get that out of the way and then go straight for the pros. I’ve got this year and next year and then I’ll have finished University”

Jake will next be in action at the 2011 Southern Counties Senior ABA Boxing Finals at Portsmouth Guildhall, Guildhall Square, Portsmouth, on Saturday 12th March 2011.
Posted by Michael Gerard Seiler at 10:50 AM