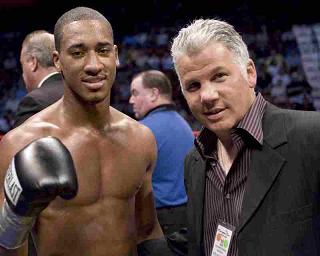 DEMETRIUS ANDRADE WITH PROMOTER JOE DEGUARDIA
On Friday April 22nd, 2007 Amateur World Champion and 2008 US Olympian, Demetrius Andrade (12-0, 8KO's) will look to take another step up the jr. middleweight ranks when he opens up that evening's ESPN "Friday Night Fights" telecast against arguably his toughest opponent to date, once beaten, Omar Bell (8-1, 5KO's) at Mohegan Sun, in Uncasville, CT. Headlining the show, which is promoted by Joe DeGuardia's Star Boxing, will be an intriguing ten round match-up between exciting jr. welterweights, Bayan "The Mongolian Mongoose" Jargal (15-1-3, 10KO's) and "Khanqueror" Breidis Prescott (23-2, 19KO's).

"This will be his (Demetrius) fourth time fighting at Mohegan Sun and already his seventh time fighting on ESPN since turning pro. He's received great exposure on the national level, and I am also pleased that we have been able to showcase him right at home here for his fans on the east coast," stated Joe DeGuardia, CEO of Star Boxing and co-promoter of Andrade with Banner Promotions. "Demetrius is moving along well and has a very bright future ahead of him . This will be his third scheduled eight rounder and by the year's end we expect him to be moving up to ten-rounders and distancing himself from the other top 154 pounders in the world."

Andrade, who skills, which include lightening fast hand speed, and power in both hands to accompany a stellar defensive game, has had boxing insiders talking about him ever since he turned pro in late 2008. While Andrade has been impressive each and every time out, there have been some in the boxing world that believe Andrade hasn't been matched tough enough to this point in his career, something that DeGuardia disputes.

"Look at the opponents he has faced thus far in his career. He has beaten three undefeated guys and three more with just one loss on their records. Only two of them have had losing records, and it's not as though they were 2-64, one guy was 0-1 who Demetrius fought in his second fight, and the other was 11-12. Is it his fault that he beats these guys as easily as he does? People forget that Demetrius is still only 23-years-old. He has a very long and prosperous career ahead of him, and his competition is better than those fed to most other prospects."

Interestingly, Andrade holds a six round unanimous decision over Chris Chatman, who was 4-0 when he met up with Andrade in October of 2009. Since that loss to Andrade, Chatman has reeled off five wins, including two against unbeaten prospects, Alberto Herrera (7-0) and Lester Gonzalez (11-0). In his last bout, Chatman held highly regarded prospect and 2007 US Amateur Champion, Charles Hatley (14-0, 11KO's) to an eight round majority draw.

After suffering the lone defeat of his career in 2008 against fellow highly regarded prospect Keith Thurman (15-0, 14KO's), Bell returned in 2010 and picked up two victories, including a six round shut-out in his last fight against previously undefeated Quinton Willis. Originally from the Island of Jamaica, Bell now calls Georgia home.

First bout is scheduled for 7:30PM. Andrade-Bell is scheduled for eight round sin the jr. middleweight division and will go live on ESPN2 at 8PM ET. Tickets are on sale now and can be purchased by calling Ticketmaster at 1 (800) 745-3000 or visiting www.ticketmaster.com. Tickets can also be purchased by calling the Star Boxing office at (718) 823-2000 or visiting www.starboxing.com. Tickets are also available for purchase at the Mohegan Sun Box Office. Tickets are priced at $80, $50 and $35. ESPN will begin live coverage of the event starting at 8PM ET.
Posted by Michael Gerard Seiler at 11:38 AM