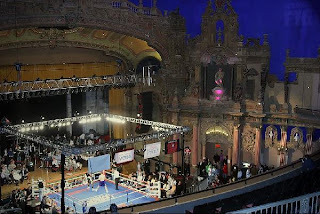 "I'm thrilled to get the Punchin at the Paradise series up and running on a regular basis. There is nothing more enjoyable to me then to be able to produce quality boxing events right here in the Bronx," stated DeGuardia, who was born and raised in the Bronx, and has run his successful law firm and Star Boxing out of the borough since 1992. "We have five dates locked in already. We plan to get things started with a bang with our Cinco De Mayo show, which will feature some of the most exciting up and coming Latino prospects in boxing, including at least two who call the Bronx their home. The "Punchin at the Paradise" series has produced some of the most exciting shows in New York in the past few years, and we feel with what we have lined up for the rest of this year, the best is still yet to come!"

While "Cinco De Mayo Fight Night" will mark the eleventh show of Star Boxing's popular, "Punchin at the Paradise" fights, it is the first time that dates are pre-set and identified for the year. With the reputation of exciting thrilling fights already established from the previous shows, DeGuardia looks to further build of the series success, something he believes starts by having the dates for the rest of the year already locked in.

"Anytime we did a show, people were always saying how they couldn't wait for the next one, and to send them info immediately on the show as soon as we knew when it would be. Now everyone knows when the dates will be, so it will help us further be able to market and build the series into what we know it has the potential to be, one of the most popular boxing series on the entire East Coast. In addition to benefiting the fans, the boxers will also know our dates and can plan accordingly. It is a win-win for everyone."

Below are the scheduled dates for the 2011 Paradise Series: