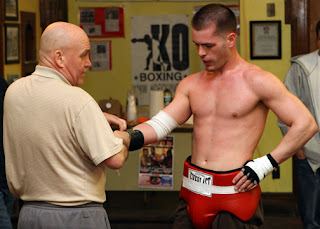 He was born into it. Grew up around and was engulfed in it. His job now has him working full-time in it, but this Friday night, Kevin Rooney Jr will experience a whole new side of professional boxing that he hasn't before. He will make his pro-debut on the undercard of Joe DeGuardia's Star Boxing ESPN "Friday Night Fights" card at Mohegan Sun in Uncasville, CT. Headlining the show will be an intriguing ten round showdown between jr. welterweight prospects, "The Mongolian Mongoose" Bayan Jargal (15-1-3, 10KO's) and "Khanqueror" Breidis Prescott (23-2, 19KO's). Also featured on the card is 2008 US Olympian and highly regarded jr. middleweight prospect Demetrius Andrade (12-0, 8KO's) taking on once beaten Omar Bell (8-1, 5KO's).

Rooney Jr., is trained and managed by his father, Kevin Rooney Sr., who after having a very respectable professional boxing career of his own, took over the reins from Cus D' Amato and lead Mike Tyson to become the youngest heavyweight champion in boxing history. Rooney who worked under D'Amato's tutelage and began assisting him in his coaching duties when Tyson was still an amateur, took complete control over Tyson, when D'Amato passed away in November of 1985. At the time Tyson was 11-0 as a pro. Before leaving Rooney, Tyson had amassed a perfect 35-0, 31KO's record, and was the undisputed heavyweight champion of the world.

Rooney went on to work with a number fighters over the years, including most notably ring legend and five-time champion, Vinny Pazienza. Now his main focus has shifted to his son.

"I'm very excited about him turning pro, and watching him develop," stated Rooney Sr. (who calls Jr. K.C.) "He is learning in there, you can see he is trying to take what I teach him and tell him and use it in the ring, and that is a good thing. He is a smart fighter, and he is very dedicated and disciplined, he trains very hard. He also is very strong. I had him in with my pro cruiserweight, Nasi Hani. He is 5-0 as a pro and had almost 100 amateur fights. After they got done sparring I asked Nasi how he was, and he was very impressed, when I told him that he would be fighting at only jr. middleweight and middleweight he almost couldn't believe it."

"The thing though about KC that I like is he has balls, he has the 'fighter' mentality. That's how I was in the ring, that's how I want all my fighters to be. Anytime you step into that ring, whether its sparring or an actual fight, you have to be ready to go out there and say 'here I am let's go', and he has that. He has an exciting style and he gives it his all each and every time he steps into the ring, and that is going to make for a fun ride for all of us involved along the way."

For those who think Rooney Jr. turning pro is some publicity stunt (after all he is the PR guy for Joe DeGuardia's Star Boxing) Rooney Sr. says that's the farthest thing from the truth.

"KC began boxing when he was just 5-years-old. He was in the gym almost every day until he was 9 and then he stopped competing. He was very active growing up though and played almost every sport there was. In high school he would work out at my gym to stay in shape for baseball and football. Then a little over two years ago he tells me "Dad I want to give boxing another shot'. So I told him, go to the gym, start training get yourself into shape then do some sparring see how you feel. After about six months of sparring he said he wanted to turn pro, but I told him, have a few fights as amateur get some experience. So he competed in the NY Golden Gloves last year and made it to the quarter finals and got robbed by the kid who ended up winning the championship. I told him to give the gloves one more shot this year and, same story different year. But KC knows, and anyone who has seen him fight knows, he just doesn't have an amateur style. I truly believe he is going to do very well and turn a lot of heads as a pro. So for anyone who thinks that this is just some stunt, or that he picked up a pair of gloves the other day and said he wanted to be a boxer, they are wrong and are going to be very surprised when you see him in that ring. Fighting is in his blood. I guess his mother can blame me for that one," says Rooney with a chuckle.

NOTE: Due to the NBA playoffs ESPN3.com and ESPN Deportes will start their telecasts LIVE at 8PM, ESPN2 will re-air at 10:30 PM.
Posted by Michael Gerard Seiler at 4:21 PM