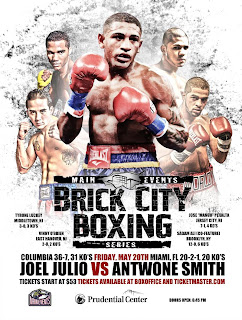 Main Events CEO, Kathy Duva, confirmed a May 20th junior middleweight bout featuring Joel Julio (36-4, 31KOs) vs. Antwone Smith (20-2-1, 12KOs). The fight will be the main event in the next installment of the Main Events Brick City Boxing Series, held in the intimate boxing club environment of Prudential Center's AmeriHealth Pavilion, Newark, New Jersey. The fight will be broadcast on ESPN 2, 9-11pm EST. The fight is promoted by Main Events in association with DiBella Entertainment. Local fighter favorites to be featured on the undercard include: Sadam "World Kid' Ali of Brooklyn, NY; Jose "Mangu" Peralta of Jersey City, NJ; Vinny O'Brien of East Hanover, NJ; and Tyrone Luckey of Middletown, NJ.

"Julio and Smith is a perfect fight to headline the next installment of the Brick City Boxing Series at Prudential's AmeriHealth Pavilion," said Duva."Two extremely popular fighters who are at a crossroads in their careers will meet in a significant bout that might very well determine both of their futures. The winner likely will go on to challenge for the world title in what has become a wide open welterweight division. A great deal is on the line and, as always, the fans can expect another great night of Brick City excitement and entertainment in the ring."

Ticket information will be released shortly.
Posted by Michael Gerard Seiler at 11:53 AM