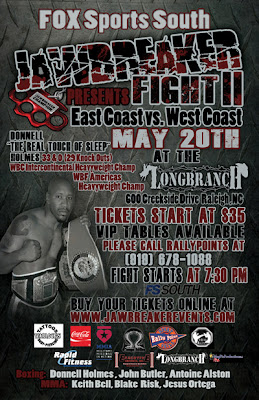 Story by Chris Williams @cboxinginfo.com
What does a professional boxer do in a year and a half hiatus from the ring? In the case of undefeated heavyweight Donnell Holmes, he drives a truck to support his family, and re-focuses his professional boxing career for one last run at a heavyweight Title shot.

Donnell Holmes returns to the ring May 20 at the Long Branch Saloon in Raleigh. While he is facing a relatively unknown fighter, Holmes sees this tune up as a gauge to measure where he is mentally and physically.

“I’ve been riding a truck to make ends meet, and I can’t afford to take time off to spar and do the things necessary for my profession. This fight is going to let me know where my wind is and how sharp I am or how much work I’ll need to get sharp. I need this fight.”

Holmes last fought February 27, 2010. He scored a crushing second round knockout of Brad Gregory. The fight was attended by then IBF President Marian Muhammad, and was supposed to be Holmes’ audition for a Heavyweight title eliminator fight. Things never transpired, and a year and a half later, Holmes is in the same spot – fighting for recognition.

"I’ve been boxing as a pro for over eight years. Boxing hasn’t done (expletive) for me. I turned pro wanting to make money and be able to take care of my family and friends. I wanted to measure myself against other great fighters to see where I stand. Instead, I’m broke. I’ve been through promoters Don King, Gary Shaw, and a guy (Rick Lazes) who cared nothing about me or my family. I was a showpiece for him. He got more out of telling people he was my promoter than helping me get fights to feed me and my family. Now, I feel like I’m starting over trying to get a title shot."

With a record of 33-0-2 (28 KO’s), Donnell Holmes should be fighting for an opportunity to face one of the Klitschkos or David Haye. He is using May 20 to jump start his career, earn a world ranking, and gain the attention of some of boxing’s top promoters.

Will fame and fortune soon come for Donnell Holmes? Paul Marinaccio and Crystal McGill’s Jaw Breaker Promotions are putting their faith in him by promoting the May 20th card, which will also feature boxers John “Bang Bang” Butler and undefeated Vernon Alston. Marinaccio, who recently fought ranked heavyweight Tony Thompson, and McGill believe they are leading Donnell to the runway - hoping he will
take off and finally get his shot before he turns 40.

For Holmes, May 20th will be treated like his professional debut. His opponent doesn’t matter; What matters is how he feels and how sharp he looks!

Tickets for Fight II – East Coast vs. West Coast featuring Donnell Holmes on Friday, May 20 start at $35 and are available through www.Jawbreakerevents.com or for VIP Tables please call RallyPoints at (919) 678-1088. The action starts at 7:30.
Posted by Michael Gerard Seiler at 8:25 PM