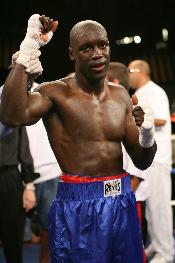 Long-time super middleweight contender, Jean-Paul Mendy will finally get his crack at a world championship when he takes on defending IBF super middleweight champion, Lucian Bute on July 9th at the Romexpo Dome in Bute's home country of Romania. Bute-Mendy is promoted by EuroPlus Computers S.R.L., and Interbox in association with Joe DeGuardia's Star Boxing.

"I am pleased that Jean-Paul Mendy finally has his world title shot, especially against such a great Champion in Lucian Bute" stated Mendy's promoter, Joe DeGuardia, CEO and President of Star Boxing. "The super middleweight division is one of the most exciting divisions in boxing right now, and it will be exciting to be in Romania watching a World Title between two fighters with 57 combined wins, no defeats and 39 KO's among them."

John-Paul Mendy stated: "I have been waiting for this opportunity for a long time. It will be a very great night in Romania on July 9th and I am very pleased that I will finally be in the ring fighting for the World Championship against Bute. I expect to bring the IBF Title belt home with me"

The southpaw Mendy, a 1996 Olympian for his native France, has compiled a 29-0-1, 16 KO record and has been pro for over 10 years. Mendy won the French super middleweight title in just his 9th fight, defeating 19-1 Rachid Kanfouah. Mendy defended that title four times.

Bute, who sports a perfect 28-0, 23KO record has defended his IBF title successfully seven times since winning the belt in 2007 against Alejandro Berrio. Bute, who was born in Romania and represented his native country in the 2003 Amateur World Championships, moved to Canada to begin his pro career. Bute has a strong following in his adopted home, having fought almost all of his professional fights there. The bout on July 9th will only be Bute's second time fighting in his home country of Romania as a professional, and first time as a World Champion.

Bute-Mendy is presented by EuroPlus Computers S.R.L., and Interbox, in association with Joe DeGuardia's Star Boxing. The bout is scheduled for twelve rounds and is for the IBF Super Middleweight Championship of the World. The bout will take place Saturday, July 9th at the Romexpo Dome in Bucharest, Romania.
Posted by Michael Gerard Seiler at 10:43 PM