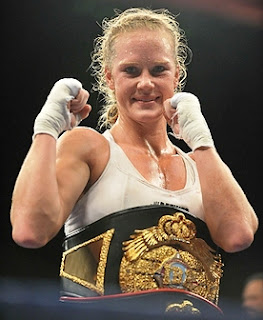 HOLLY WITH THE BELT
Dec. 2 at Route 66 Casino Hotel in Albuquerque
By: Bob Trieger
ALBUQUERQUE, NM (June 11, 2011) – Right after she registered her 30th career victory last night, promoter Lenny Fresquez announced that Holly “The Preachers Daughter” Holm will take on Anne Sophie Mathis -- the top two pound-for-pound female boxers in the world -- December 2 for “World Dominance,” at the Route 66 Casino Hotel in Albuquerque.

Holm (30-1-3, 9 KOs) will try to regain her IBA Welterweight title and WBAN Championship Belt in the 10-round main event against Mathis (23-1, 20 KOs), the WBO European Welterweight Champion from France. Holm-Mathis, presented by Fresquez Productions, is a modern day match-up between the consummate boxer, southpaw Holm, and knockout specialist, Mathis, who will be fighting outside of Europe for the first time.

“This has all the makings of an instant classic, potentially one of the greatest fights in women’s boxing history,” Fresquez said. “Holly has exhausted all of her competitive options in the U.S., fighting just about every legitimate title challenger – 11 world champions – and now she wants to test herself against the best European fighter, Ann Sophie Mathis. It promises to be a memorable night for boxing fans all over the world, not just women’s boxing fans.”

Holm’s only loss was in 2004 and she’s won 23 of 24 fights since with one draw. A multiple world champion in three different divisions (light welterweight, welterweight and light middleweight), Holly has defeated all of the significant names in women’s boxing from the 140 through 154-pound classes, including Christy Martin, Mary Jo Sanders, Mia St. John, Jane Couch, Duda Yankovich and Chevelle Hallback (twice).

Mathis is riding a 22-fight win streak, dating back to 1995 when she lost in her second pro fight, and she’s a two-time world light welterweight champion. December 2nd will mark the fifth anniversary of her first world title victory, in which she stopped previously unbeaten Myriam Lamare (13-0) for the WBA crown as well as the vacant EBU championship. Ann Sophie’s victims also include Couch, Yankovich, Ana Pascal and Nathalie Toro.

For more information about “World Dominance: Holm vs. Mathis” go on line to www.FresquezProductions.com.
Posted by Michael Gerard Seiler at 6:02 PM