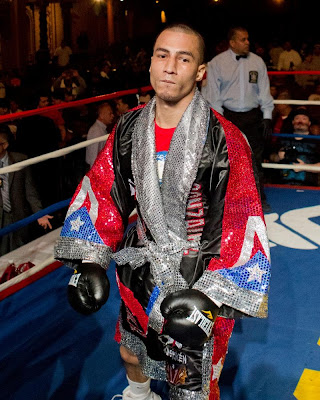 STAR BOXING NEWS
Star Boxing's hard-hitting, Puerto Rican prospect Emanuel Gonzalez kept his undefeated record in tact with a dominating performance over Jason Rorie earlier tonight on the undercard of the Boricua Invasion at the Roseland Ballroom in New York City.
The 23-year-old super featherweight Gonzalez, a 2008 NY Golden Gloves 125 lb. open Champion, dominated Rorie from the opening bell, landing crisp, hard right hands and uppercuts behind a piston-like jab.  Gonzalez's jab bloodied the face of Rorie almost immediately, but to his credit, Rorie hung tough.
Round after round, Gonzalez showed that he was just too fast, strong and accurate for his opponent.  In the end, Gonzalez was awarded a six-round unanimous decision by scores of 60-54, 60-54, while the third judge gave the spirited Rorie one round, scoring it 59-55.  With the win, Gonzalez improved his record to a perfect 9-0, 7KO's.  Look for Gonzalez, who is now 2-0 since signing with Star Boxing in April, to be back in action very soon.
Posted by Michael Gerard Seiler at 12:03 AM