The anticipation of a slugfest turns fans voracious, and "Irish" Seanie Monaghan (14-0, 9 KO's) satisfied his hometown fans at the Roseland Ballroom in New York City, delivering a TKO at 2:30 of round eight against durable Romaro "The Saint" Johnson (11-7-1, 6 KO's), claiming the WBC Continental Americas Light Heavyweight title.
"He was a tough guy," Monaghan explained. "I sparred over forty rounds to prepare for him."
During the last thirty seconds of the opening round, Monaghan pummeled Johnson with five unanswered body shots that set the tone for the rest of the fight.
Monaghan, 30, showcased an improved defense. Connecting with a solid overhand right in round two, he slid to his right after he made contact to avoid a counter-punch.
In round three, Monaghan threw and landed a furious barrage of punches to the body and head, leaving the veteran Johnson briefly stunned. Monaghan searched for openings and found the target without difficulty.
Johnson took many punishing blows, especially in round six, although he never went down. After a succession of precise combination punching from Monaghan, Johnson started to display wobbly legs.
In round eight, Johnson walked straight into a vicious right uppercut by Monaghan and was badly hurt. Monaghan jumped on the opportunity in front of him, connecting with a rock-solid left hook to Johnson's face. He followed up with numerous punches to the body and head, prompting veteran referee Eddie Cotton to halt the action.


In the co-main event of the evening, Puerto Rican sensation Thomas Dulorme, 22, (15-0, 12 KO's) thrilled fans once again with his crowd-pleasing style, winning by TKO after the completion of the seventh round against an extremely tough Alberto Herrera (8-7-1, 5 KO's).
Dulorme possesses deadly punching power with both hands, as a resilient Herrera discovered after the opening bell. Dulorme was able to strike Herrera repeatedly with lead right hands and crisp, devastating left hooks that looked awfully comparable to another Puerto Rican legend - Felix "Tito" Trinidad.
By the fourth round, Herrera's face appeared inflamed from the leather let loose by Dulorme. Still, Herrera persisted to apply pressure, but could not match Dulorme's proficient hand speed and exceptional coordination.
Dulorme is an outstanding raw talent, although he needs to add a sturdy left jab to his arsenal in order to launch his career to the next level. Right now, Dulorme walks toward his opponents a little too often without setting up a steady left jab, but has gotten away with it early in his professional career due to his extraordinary, natural talent.
Light Heavyweights
Ozone Park's Will Rosinsky (16-1, 9 KO's) soundly defeated Aaron Pryor, Jr. (16-6, 11 KO's) via eight-round unanimous decision. Rosinsky received scores of 78-74 and 79-73 twice from the official ringside judges.
Rosinsky, 27, battered Pryor, 33, throughout the fight with a relentless, violent body attack. Pryor did not have the power to keep Rosinsky from imposing his will. Pryor was in excellent physical condition to absorb Rosinsky's colossal assault, but the only success he exhibited was temporarily catching Rosinsky near the ropes when he was at a safe distance, employing his height and reach advantage.
Junior Welterweights
Gabriel "Tito" Bracero (19-1, 3 KO's) won an eight-round unanimous decision versus Jermaine "Thunder" White (17-5, 9 KO's). Official scores were 80-71, 79-72 and 77-74.
In the first round, Bracero, 31, sustained a small cut on the corner of his left eye resulting from a clash of heads. After that, Bracero connected with a clean, overhand right mid-round.
During round two, there was a second clash of heads. Now, Bracero had blood gushing down from his left cheek. However, Bracero maintained his composure, and continued to throw and land accurate punches behind a well-timed left jab. After the round, swelling emerged under White's right eye.
White, who fought in a crouching, conventional stance, was deducted one point from referee Harvey Dock after a third clash of heads left Bracero with a cut on his forehead. Bracero closed the round strong, connecting with a sweeping left hook to White's head.
In the fourth round, Bracero staggered White with a short right-cross and followed it with a powerful left hook that sent White into the ropes.
Both fighters fought fiercely in a highly competitive round five. Still, White was clearly losing to Bracero, who was dictating the bout with his superior lateral movement.
White began to fatigue in round six, and started to unleash slapping punches in the clinches.
Bracero used tricky angles to set up a crisp, right-hand shot that momentarily stopped White in his tracks during round eight.
Bracero addressed the headbutts briefly after the contest.
"The headbutts had no effect at all on my performance tonight," exclaimed Bracero.
Heavyweights 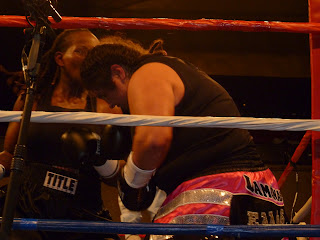 Sonya Lamonakis (6-0-2, 1 KO) and Tiffany Woodard (4-6-3, 3 KO's) battled to a six-round draw. Official scores were 58-56 for Lamonakis, 58-56 for Woodard and 57-57 even. It was the third meeting between the two combatants. Lamonakis won via six-round unanimous decision in their first encounter, and captured a six-round majority decision in their second one.
Lamonakis utilized numerous lead right hands to Woodard's head and left hooks to her body, but lacked the consistent left jab she displayed in their first two bouts.
"I couldn't reach her with the jab tonight," stated Lamonakis. "I started to catch her with big shots, so I just kept throwing."
Junior Lightweights
Brooklyn's Floriano Pagliara (13-4-1, 7 KO's) outpointed Rynell Griffin (6-10-2, 2 KO's) over six, one-sided rounds. All three ringside judges scored the bout 59-55 in favor of Pagliara.
Griffin sustained a minor cut near his right eye, and was stunned when Pagliara tagged him with a flush left hook to the head in the fifth round.
Junior Welterweights
Junior welterweight prospect Ivan Redkach, 26, (11-0, 10 KO's) stopped Dedrick Bell, 28, (7-15, 5 KO's) at 1:55 of round one. The victory marked the Ukrainian's fourth professional knockout in the first round.
Posted by Michael Gerard Seiler at 4:51 PM

Great article. Thanks for sharing results!