Living The Dream Has Its Challenges 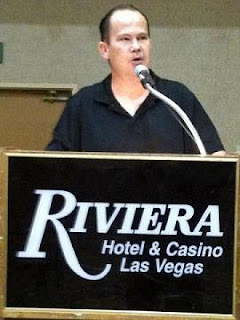 Jason "Houdini" Lundgren arrived in Las Vegas, Nevada in 1998 from a small town in the Pacific Northwest - homeless. Carrying a duffel bag on his shoulder with a meager $5 in his pocket, Jason wandered outside the MGM Grand Hotel & Casino. He noticed a major boxing card was taking place there that night. People dressed elegantly were getting out of their limousines and heading inside to witness an entertaining night of prizefighting at the famed boxing venue. At the time, Jason did not know when or where he would receive his next meal, but he had many dreams and hope, envisioning one day to be one of those chic individuals exiting the limousines and entering the front doors of the illustrious hotel. Little did he know at the time this would lead to a career in the promotional world of boxing.

"I didn't know anyone when I got to Las Vegas," said Lundgren. "I wanted to be just like all those pretty people getting out of the pretty limos. I just kept dreaming."

Prior to his arrival in Las Vegas, however, Jason hitchhiked for six days down to Mesa, Arizona. He attended Dobson High School for his senior year, although he did not graduate. Instead, he elected to attend the Phoenix Job Corps, acquiring his GED while studying sales.

During his stay in Arizona, Jason met a woman that radically changed his life. Diane Onofrio, Urban Outreach’s Program Director in Tempe, Arizona, met Jason approximately fifteen years ago when she was just a staff member. When their paths crossed, she really believed Jason could turn his life around, and he sensed her devotion toward him.

“The most inspiring thing Diane did for me was give me her time,” admitted Lundgren. “She gave me the inspiration to be somebody and to assist others in need.”

Some of Jason’s most difficult hardships occurred on the streets in Central City East, an area in downtown Los Angeles, California also known as Skid Row. Living outside the Midnight Mission due to full capacity, Jason was number 579 to receive one piece of bread, one hot dog and a cup of water through homeless feeding.

After watching the movie "The Perfect Storm", Jason became deeply inspired to turn into a commercial fisherman. His friends thought he was crazy for thinking about fishing living in the desert. Nevertheless, Jason started to dream and took action to get there. Within six months, Jason emerged as a Bering Sea Fisherman among the big processing vessels on the Amaknak Island, which is better known as Dutch Harbor in Unalaska, Alaska. He was contracted to work 4 months each year for two consecutive years.

Following his stint as a commercial fisherman, Jason attended classes in 2002 at the College of Southern Nevada. During one of his classes, Jason decided on developing his own small business. Eventually, Jason dropped out of college and established himself as a fine salesman, selling high-priced knives and swords. After a brief period, Jason was bored being a salesman and wanted to venture into another industry.

In 2007, Jason applied at Bell Limousine, following the vision he owned when he first reached Nevada. The company was contracted to drive Miss America and Miss Universe together to the grand opening of Planet Hollywood Resort & Casino. Owner Brent Bell and General Manager Breck Opecka gave Jason the assignment.

“There I was driving all the pretty people,” exclaimed Lundgren. “I actually dreamt about being a limo driver and applied. I kept taking action.”

By the end of the night, Jason was driving home George Maloof, Jr., owner of the Sacramento Kings and minority owner of the Palms Resort Casino.

“The ride for him was free because my company had a contract for the grand opening,” stated Lundgren. “Still, he tipped me $300 for a 15-minute, 8-mile ride. I was so grateful.”

News travels fast in the limousine industry. Jason was much admired after working the night of Planet Hollywood’s grand opening. Subsequently, he received a phone call from their front desk requesting his services. Next, Jason found himself driving Robert Earl, who was the brains behind the formation of Planet Hollywood, as well as high-profile actor Jason Statham. Statham is best known for his roles in “The Transporter” movies.

“Planet Hollywood has been absolutely magical for me,” boasted Lundgren. “Here I was totally living my dream.”

Along his journey, Jason met Marshall Enzer at a gathering of mutual friends. Enzer has worked the corner as a cutman for numerous world champion boxers, including Michael Nunn, Gabriel and Rafael Ruelas, Hasim Rahman, Joel Casamayor, Yuriorkis Gamboa, Zab Judah and countless others. Enzer befriended Jason and introduced him to Javier Zendejas.

Javier Zendejas, along with Jose Garcia, were part of the ring entourage and personal staff of former IBF & WBA Light Middleweight champion, “Ferocious” Fernando Vargas. Zendejas and Garcia became very close with Lundgren, teaching him the business of boxing. One day, Jason was recommended for a job on Vargas’ personal staff as a security guard. He jumped at the opportunity.

“I was truly honored to be included and welcomed to their team,” declared Lundgren. “To this day, I consider Javier and Jose my hermanos.”

In early 2009, Vargas promoted a boxing/MMA event in Primm, Nevada under his company, Vargas Entertainment Promotions. On the way to Buffalo Bill’s Casino, Vargas elected to display his clothing line outside the entrance, but was worried it would not get done. Could Vargas’ merchandise get set up in time for the show?

Lundgren commented, “I have it all under control. Don’t you worry about anything. I’ll take care of it.”

“Dang Houdini,” Vargas shouted. The nickname stuck with Jason ever since their car ride in the desert.

Through the years, Jason established a solid friendship with former WBA Super Featherweight and WBC Light Welterweight world boxing champion Roger Mayweather, who is widely recognized at this time as the head trainer of his undefeated nephew, Floyd Mayweather, Jr.

“Roger Mayweather is a walking encyclopedia and has taught me so much about the history of the sport,” explained Lundgren.

“Yoel has given me tremendous insight on the business end of things from all of his years involved in boxing,” noted Lundgren.
Additionally, Vargas promoted a card on November 6, 2009 at the Palms Resort Casino featuring Zab Judah, Joel Casamayor and Ron Johnson.

Cruiserweight Ronald “The American Dream” Johnson, who sports an 11-1, 3 KO’s professional record, encouraged Jason to dream big in life and gave him a job as a Site Coordinator for his promotional company, American Dream Presents. Johnson founded the company with his childhood friend “Awesome” Aaron Williams (21-3-1, 14 KO’s), also a professional boxer in the cruiserweight division.

“Johnson gave me the confidence to dream bigger than I ever had,” said Lundgren. “He told me that if you can dream it, you can do it. And that there’s no limit to what one can dream.” 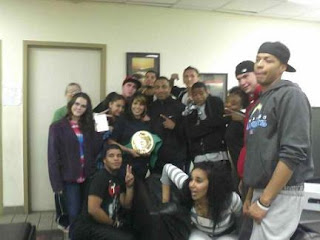 Today, Lundgren is a co-founder with Ron Johnson of Dream Vegas, an organization created to assist homeless youth and help make their dreams come true. He repeatedly gives motivational speeches, retelling his story to convince younger people to never give up hope.

“I lived homeless on and off my whole life,” revealed Lundgren. “I am a true survivor. I want to carry the message of hope and facilitate people’s dreams. I learned to hope and dream, and it brought me to where I am right now. I want to give back to the homeless youth. The I-HELP program in Tempe, Arizona, the Homebase Youth Services in Phoenix, Arizona and the Shannon West Homeless Youth Center in Las Vegas, Nevada all comforted me. Now, I want to show that I have faith in these teens. They have the rest of their lives to become whatever they want in life.”

All one has to do is keep dreaming, and a little 'magic' always helps.