Khan KO's Salita in the 1st Round, Retains WBA Title 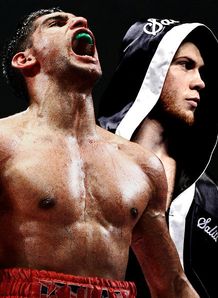 Amir Khan knocked down Dimitriy Salita 3 times in the 1st round to retain his WBA junior welterweight title. Khan first floored Salita with a left hook-overhand right combination 1o seconds into the fight. After trapping Salita in the corner, Khan dropped him again when he connected with a barrage of punches. With Salita's back against the ropes, Khan finished him with a hard left hook to the head. The official time of the stoppage was 1:16.

Amir Khan improves his record to 22-1, 16 KO's. Dimitriy Salita suffered his first professional loss and falls to 30-1-1, 16 KO's. In the Lightweight class at the 2004 Olympics, Khan captured a Silver Medal. It looks like Manny Pacquiao has one great sparring partner in Amir Khan, as he prepares for his potential fight with Floyd Mayweather Jr. on March 13, 2010.
Posted by Michael Gerard Seiler at 5:46 PM