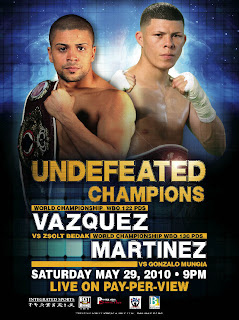 In a fierce battle of undefeated super bantamweights, 25-year-old Wilfredo Vazquez Jr. (19-0-1, 16 KO's) gave a remarkable performance, stopping Hungarian Zsolt Bedak, 26, (15-1, 5 KO's) at 1:12 in the tenth round to retain his WBO championship. Bedak, who holds 232 amateur fights to his credit along with a victory over Abner Mares at the 2004 Olympics, could not handle the crisp, precise punches of the lightning-quick Vazquez.

Vazquez had a minimal edge in round one, as his punches were slightly sharper. However, Bedak landed sound body punches late in the round.

Vazquez surprised Bedak with a rock-solid overhand right in round two. Still, Bedak answered with a hard left hook.Vazquez was busier and seemed to find his range.

Bedak connected with a big left hook in round three, but Vazquez took the punch well. Bedak also landed a hard overhand right and sharp right uppercut in close range. Clearly, Bedak landed the cleaner punches in the round.

Both men traded overhand rights in round four. Then, Bedak connected with a sweeping left hook. As the round progressed, Vazquez landed many right hand blows. Bedak sustained minor swelling on the left side of his head.

In the fifth round, Vazquez seriously hurt Bedak with a series of overhand rights. After absorbing the shots, Bedak, unloaded a massive left hook. Bedak kept charging Vazquez, although he was being struck by numerous punches.

Bedak displayed immense swelling around both eyes in round six. Yet, he opened the round by landing a right - left hook combination. On the other hand, Vazquez showed minor swelling under his right eye. Vazquez utilized his jab and lateral movement, as he continued to score with his shots.

Round seven was another highly competitive round with both fighters landing flush shots, however, Vazquez was able to inflict more damage with his blows.

Vazquez repeatedly delivered punishing overhand rights to Bedak's head in the eighth round. Also, Vazquez got the better of Bedak yet again during the exchanges in round nine. Bedak landed some very accurate shots, but lacked the power to stun Vazquez. MMA Gloves

At long last, Vazquez really hurt Bedak in round ten when Bedak walked into a crushing overhand right. Then, Vazquez threw a barrage of punches, and connected with a critical left hook to Bedak's body. Next, Vazquez floored Bedak with a severe overhand right. Bedak got up, although his corner threw in the towel at 1:12.

Bedak proved he could take a solid punch, but he absorbed too many quality shots from Vazquez tonight.


UNDERCARD
24-year-old McJoe Arroyo (3-0, 1 KO) dished out a ferocious beating to Jairo Delgado (3-7, 3 KO's), 29, winning a four round unanimous decision in a bantamweight bout. All three official scorecards read 40-36 in favor of Arroyo.

In the first round, Arroyo snapped Delgado's head back with a straight left. After landing a stern right hook, Arroyo wobbled Delgado when he connected with another well-timed straight left. Throughout the entire fight, Arroyo placed his punches perfectly.

Delgado tied up Arroyo in round two after he was momentarily hurt by a right hook. In round three, Delgado sustained terrible swelling under his right eye. Arroyo continued to connect with a sequence of violent body punches, and repeatedly landed an onslaught of right hooks and straight lefts in the fourth round. Delgado barely finished the fight on his feet.


Hanna Gabriel (10-0-1, 6 KO's) captured the women's WBO light middleweight title by stopping Gardy Pena (9-2-2, 6 KO's) in the first round. After Gabriel landed a devastating right to the body, Pena was forced to quit. The official time of the stoppage was :22 seconds.


In a lightweight bout, Jose Gonzalez (10-0, 6 KO's) dropped Keivy Arce (3-1, 1 KO) three times in round two en route to a knockout victory. Following a slow-paced first round, Gonzalez floored Arce with consecutive lefts. When Arce got up, he was met with more swift left hands from Gonzalez, which put him on the canvas yet again. In conclusion, Gonzalez caught Arce with a sharp left uppercut, and followed it with a series of damaging right hands. Ultimately, a straight right hand by Gonzalez put Arce down for good at 2:26 of the second round.


McWilliams Arroyo (3-0, 3 KO's), twin brother of McJoe Arroyo, scored a second round knockout against Samuel Gutierrez (5-6-1, 0 KO's) in a super flyweight bout. After landing a string of extremely brutal punches in round one, Arroyo sent Gutierrez into the ropes and onto the canvas when he connected with an overhand right in round two. Time of the stoppage was 1:35.

McWilliams Arroyo won a Gold Medal at flyweight during the 2009 World Amateur Boxing Championships, and also in the 2007 PanAmerican games.

After finding his range easily in round one, Martinez peppered Munguia with an assortment of clean punches. Toward the end of round two, Munguia stepped up his punch output and engaged in several heated exchanges with Martinez.

Martinez got the better of Munguia in round three, landing the sharper, more precise punches. Munguia landed some heavy shots, but Martinez had a higher connect rate. Both men traded blows non-stop for the last minute and a half of the round.

In round four, Martinez seriously injured Munguia with rights to his body and head. Then, Martinez dropped Munguia with a potent right uppercut. Munguia was unable to beat the ten count, as the official time of the knockout was 1:48.
Posted by Michael Gerard Seiler at 12:22 AM

The Vasquez fight was awesome, he looked unstoppable.