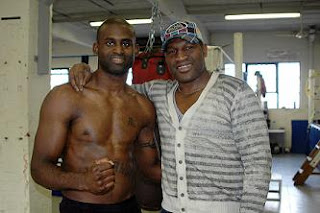 During his magnificent career Bruce has won the British Southern Area title, twice held both the BBBofC British and Commonwealth Cruiserweight belts, winning the coveted Lonsdale belt outright. On the World scene Bruce won the WBU International Cruiserweight title and challenged for a World crown no less than three times.

Still a keen supporter of the Cruiserweight division Bruce took the opportunity to meet with Mitchell at the Paul Morby and Daniel Cadman weigh-in, after which he said. “It’s great to have new blood in the division. Mitchell looks strong and with Johnny (Eames) training him will do good.

I wish Mitchell the best of luck tomorrow. Nick (Okoth) is a tough fighter but I think Mitchell will have the edge.”