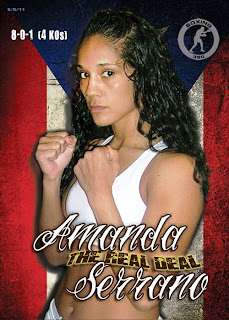 The 23-year-old Serrano (8-0-1, 4 KOs), who was born in Puerto Rico, now fighting out of Brooklyn, is slick-boxing younger sister of former lightweight contender, Cindy Serrano. Amanda is presently rated No. 3 by independent source WBAN, as well as No. 7 by the WIBA.

“I wasn’t sure about getting involved in female boxing,” Boxing 360 CEO & Founder Mario Yagobi explained. “But I was at her last fight in upstate New York and I was unbelievably impressed by what I saw from her in the ring. I was equally impressed outside of the ring when we spoke. All she does is train to fight. She doesn’t have a cell phone, a boyfriend, or even go out with friends. She trains everyday to the point of exhaustion, goes home to sleep, and then it is right back to the gym the next day for the same routine. Amanda Serrano is a world champion in the making and we’re going to position here for that opportunity.”

In her last bout in January, Serrano thoroughly dominated rugged Ela Nunez for a win by unanimous 6-round decision, avenging the only blemish on Amanda’s record, a draw versus Nunez in 2009.

Boxing 360 Director of Boxing Bob Duffy believes Amanda is ready to challenge cross-town rival Maureen Shea, the reigning NABF featherweight champion from the Bronx. “I think it’s a natural for New York City and would draw a lot of interest,” Duffy said. “Maureen is the first female NABF champ from New York City. She’s the best and Amanda wants to fight the best. She needs to get past Maureen to get to where she eventually wants to reach.”

Go to www.Boxing360.com for more information about Serrano, Boxing 360 or any of its other fighters, as well as its scheduled events.
Posted by Michael Gerard Seiler at 12:42 PM