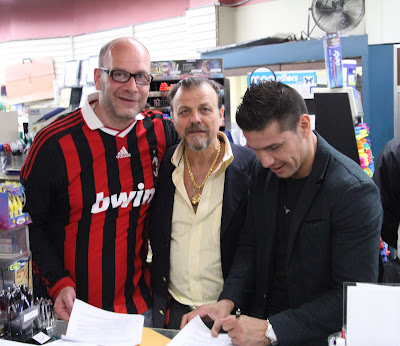 “This is an important day for DiBella Entertainment,” said DiBella. “Sergio Martinez has proved in his recent run of fights that there is no challenge he fears and that there is no challenge he cannot conquer. Together, we will look to make the biggest fights against the biggest names in boxing, and we won’t stop until ‘Maravilla’ is universally recognized as pound-for-pound, the best in boxing.”

Martinez, 36, originally linked up with DBE in 2007, and has gone 7-1-1 over the span. The only blemishes on his record during that time were a close decision loss to Paul Williams in a fight widely heralded as the 2009 Fight of the Year, and a universally criticized draw versus former champion Kermit Cintron in 2009, a bout where most people thought Martinez should’ve been awarded a knockout in round seven, and also did more than enough to win after 12 rounds.

After a victory over Kelly Pavlik to win the middleweight crown in April 2010, and a stirring second round knockout to avenge his loss to Williams in November, Martinez was named the 2010 Fighter of the Year.

“I’ve never had any doubt that DiBella Entertainment is the best promoter in boxing,” said Martinez. “I have no doubt that we will continue to do great things together. This is exactly what I wanted.”

Also in attendance at the signing, which took place at a local stationary store just a few blocks from DBE’s mid-town headquarters, was Martinez’ longtime adviser, Sampson Lewkowicz.

“This is about finishing what we started,” said Lewkowicz. “I believe that in Sergio Martinez we have a grand champion who is the best fighter in the world."

Martinez is scheduled to return to the ring October 1 on HBO against European middleweight champion Darren Barker (23-0, 14 KOs).
Posted by Michael Gerard Seiler at 10:59 PM